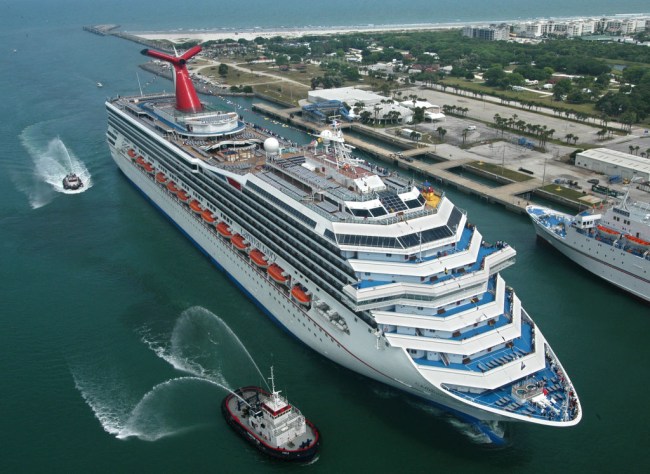 Two Carnival Cruise ships collided in Mexico, leaving only one question: How do two massive cruise ships crash into each other?

We take you to Cozumel, Mexico, where the maritime accident occurred. Two Carnival cruise ships were attempted to dock in the Cozumel port when the Carnival Glory ship smashed directly into the Carnival Legend at 8:50 a.m. on Friday. Video of the collision was taken by passengers of Royal Caribbean’s Oasis of the Seas, which managed to dock without crashing into any other cruiseliners.

Here is another angle of the cruise ship collision taken from the land.

“There is one reported minor injury of a Carnival Glory guest that occurred when a group of guests were evacuated from the dining room on Decks 3 and 4,” the official Carnival Cruise Line Twitter account wrote on Twitter.

We are assessing the damage to both ships. There is one reported minor injury of a Carnival Glory guest that occurred when a group of guests were evacuated from the dining room on Decks 3 and 4.

Officials say that Carnival Cruise Line is evaluating the damage to both of its ships after the crash. “We are assessing the damage, but there are no issues that impact the seaworthiness of either ship. We have advised guests from both ships to enjoy their day ashore in Cozumel,” Carnival said in a statement.

Crazy from Carnival Glory – crashed into Carnival Legend as it attempted to dock in Cozumel pic.twitter.com/qJffndnHf6

The Carnival Glory suffered severe damage to the rear of the ship.

"We are assessing the damage but there are no issues that impact the seaworthiness of either ship."

CRUISE SHIP CRASH: The Carnival Glory crashed into the Carnival Legend while trying to leave the port of Cozumel this morning, according to a viewer.

Check out the damage to the stern. @wxyzdetroit pic.twitter.com/owW21HLzcs

The Glory is a Conquest-class Carnival cruise ship that is 952-feet long, has 13 decks, and accommodates up to 2,980 passengers. This particular cruise left from its homeport of New Orleans on Sunday on a 7-night cruise and is scheduled to return this Sunday.

The Port of Cozumel is a bustling cruise port, and on Friday, there were eight huge cruise liners scheduled to dock there today. The Carnival Glory was scheduled to officially dock in the harbor at 10 a.m. on Friday.

Can you imagine the road rage, errr, water rage you must have if you’re the captain of a cruise ship and you get rear-ended by another cruise ship? All of that water to maneuver in, and you end up smashing into another giant boat.

In June, the MSC Opera cruise ship crashed into a tourist ferry while attempting to dock in Venice, Italy.