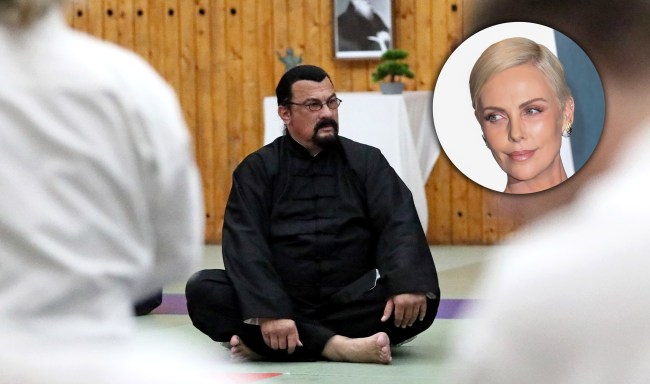 Charlize Theron versus Steven Seagal is the celebrity beef I didn’t know I needed… until now. Who knew?!

Theron, an action movie star in her own right with films like Æon Flux, Mad Max Fury Road, and Atomic Blonde under her belt, knows a thing or two about fake fighting. In fact, she has been using the same stunt trainers that Keanu Reeves has used for the John Wick films.

Theron admits to being a big fan of the genre, but not so much when it comes to one of the all time legends of action movies, Steven Seagal.

Related: Charlize Theron Says She Wants Somebody, Even An Average Guy, To ‘Grow A Pair, Step Up’ And Ask Her Out

“At night I’ll go online to watch fighters or watch people fight and you always come across that odd Seagal video of him ‘fighting’ in Japan, but he really isn’t,” Theron told Howard Stern while talking about doing research for her action roles. “He’s just incredibly overweight and pushing people. He’s overweight and can barely fight … look it up, it’s ridiculous. He’s shoving people by the face. It’s a whole setup.”

Then, just to make sure everyone got the message, Theron added, “I have no problem talking sh*t about him because he’s not very nice to women so **k you!”

Just spitballing here, but Theron might be referring to the numerous times Seagal has been blamed for sexual misconduct by actresses including one time when he was accused of rape.

My final audition for a Steven Segal movie took place in his office. He told me how important it was to have chemistry off-screen as he sat me down and unzipped his leather pants. I️ ran out and called my agent. Unfazed, she replied, “well, I didn’t know if he was your type.”

One might say that over the years Seagal has considered himself to be Under Siege from some of his co-stars for having a Fire Down Below and thinks he is Above The Law when in reality he has been walking On Deadly Ground and quite a few of these women would like to see him Marked for Death.