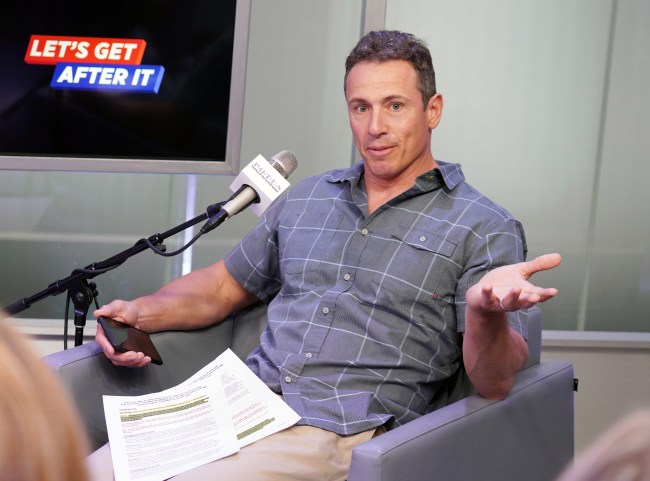 Oh, is this the wall that’s made entirely of glass? The one that serves as the backdrop for my wife’s yoga vids? Seems like a good place to be naked. Don’t mind me, just passing through facing the shrubbery, my traps and delts gleaming off the midday sun. -Chris Cuomo’s brain, fueled by 64 ounces of Bulletproof Brain Octane coffee.

I’m not hating though. Let me jackedsplain to those of you with civilian bodies: when you’re super ripped but you’re not a model/bodybuilder/gay, you can’t get away with posting photos of how ripped you are. People hate you for it. You’re seen as vain, an asshole, a douchebag. So you have to find tricky workarounds. You have to tone down the tonedness by posing with a group of shirtless friends on the beach to make it seem like you’re just hanging out with the pals! Group pic! Nevermind that you just banged out 45 curls with resistance band you bring just in case a group pic comes together.

Or, in the case of Chris Cuomo, you walk into the background of your wife’s yoga vid. Leave that puppy up for few a minutes—just long enough for the internet to get a taste, screen grab it, have it go viral, and then have your wife “rush” to take down the clip. Whoops! Silly us. Just a perfectly stunning couple, going about our incredibly healthy day.

See those pics? Chris gets it. He’s holding that striper across his abs to humbly obscure his abs. Similarly, the gay pride shirt makes the flex about a cause, not about the size of his biceps. Jacked people have to deflect. That’s just how it goes.

Someday, we’ll be comfortable enough as a people to let Chris Cuomo post entirely naked, intentional photos of himself without this dumb runaround. Until then, let’s enjoy these grainy sasquatch sightings of CNN’s most delectable snack.