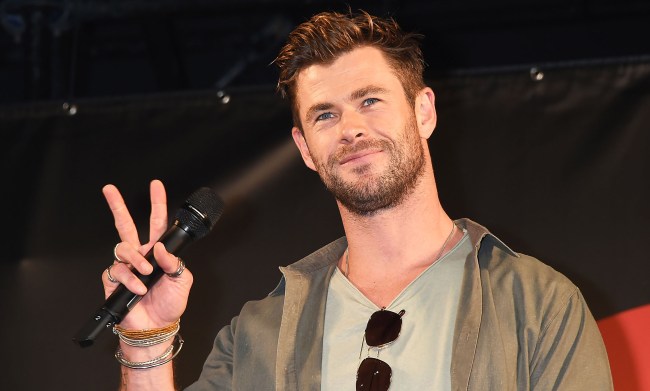 This week in a heavyweight battle for supremacy in the AGBO Superheroes Fantasy Football League, Marvel superstars Ryan Reynolds is taking on Chris Hemsworth.

Reynolds currently sits in second place in the league at 10-2, while Hemsworth is fighting for his playoff life in fifth place, but tied by record with the third and fourth place competitors at 8-5.

As is required in this league during Trash Talk Week, Reynolds was forced to issue a little trash talk Hemsworth’s way. However, claiming he doesn’t trash talk, Ryan instead enlisted his mom Tammy Reynolds to do it for him.

And do it she did, calling Hemsworth “everyone’s least-favorite Australian” and saying the Thor star looks “like a bodybuilder f—ed a platypus,” among other things.

For payback, Hemsworth also enlisted the help of a “parent,” who in reality is costume designer Dan Blacklock, to speak for him in this escalating war of words.

In the video, Hemsworth reminds his “dad” that he hates Reynolds, that Ryan is a d-ckhead, the worst actor, and his least favorite Canadian of all time. This despite the fact that Hemsworth’s “dad” doesn’t recall actually saying or thinking any of those things.

Hemsworth then attempts to have his “dad” talk about how much he dislikes Reynolds’ Aviation Gin, another thing that his “father” doesn’t recall, and in fact, states that it is quite the opposite.

Trash Talk Week in the Marvel fantasy football week should be every week. Even when football season is over.