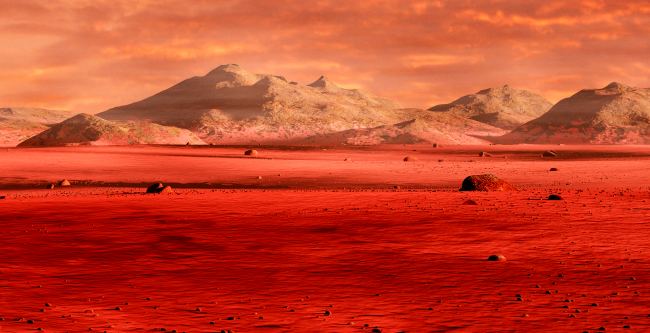 Being one of the first colonists on Mars just keeps sounding less and less enticing. Between the fact that there’s a “good chance,” according to the supreme ruler of Mars, that the first settlers on Mars will die up there, now comes a report that these same colonists may have to use their own blood to make concrete for building materials, it isn’t going to be an easy sell.

Not that either of those things are unexpected. After all, colonizing Mars has never been done before. Elon Musk says SpaceX will have put humans on Mars by the year 2026, if not sooner, but that’s the easy part. The hard part will be transporting all the building materials and other good needed for those same settlers to have any chance of survival.

The University of Manchester reports transporting a single brick to Mars can cost around $2 million. A single brick!

The University of Manchester also reports that it has come up with a solution, and it’s kind of gruesome.

In their study, published in Materials Today Bio, a protein from human blood, combined with a compound from urine, sweat or tears, could glue together simulated moon or Mars soil to produce a material stronger than ordinary concrete, perfectly suited for construction work in extra-terrestrial environments.

The cost of transporting a single brick to Mars has been estimated at about US$2 million, meaning future Martian colonists cannot bring their building materials with them, but will have to utilise resources they can obtain on-site for construction and shelter. This is known as in-situ resource utilisation (or ISRU) and typically focusses on the use of loose rock and Martian soil (known as regolith) and sparse water deposits. However, there is one overlooked resource that will, by definition, also be available on any crewed mission to the Red Planet: the crew themselves.

Doing such a thing with human blood would really make Mars the Red Planet, but I digress.

Related: Elon Musk Decrees Earth Law Shall Not Apply To Him When He’s The Supreme Ruler Of Mars

This blood-based concrete, termed AstroCrete, would not only save countless millions of dollars, it could end up being “substantially stronger than ordinary concrete.”

“Scientists have been trying to develop viable technologies to produce concrete-like materials on the surface of Mars, but we never stopped to think that the answer might be inside us all along”, said Dr Aled Roberts of The University of Manchester.

Truth be told, as hard as it may be to believe, using blood to make concrete isn’t even a new idea. Animal blood was historically used as a binder for mortar, the report states.

“It is exciting that a major challenge of the space age may have found its solution based on inspirations from medieval technology”, said Dr. Roberts.

I guess using the blood from the first settlers on Mars to make concrete is better than some of the other alternatives the scientists considered: nails, hair, dead skin cells, mucus, and poop. Gross.