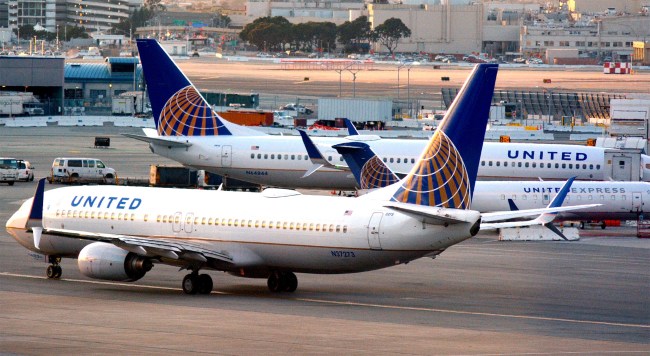 Pop quiz: What’s more absurd? Eric Clapton suing a woman for selling a copy of a CD purchased at a department store in 1987? Or this Florida man who was kicked off a flight and banned from flying United Airlines for wearing women’s underwear as a face mask?

Trick question. The answer is a recent court ruling that states walking from your bed to a home office counts as commuting.

This Florida man, named Adam Jenne, getting the boot from a United Airlines flight for wearing a pink thong over his face as a mask does come with video.

Related: Spirit Airlines Passenger Sparking A Cig In The Cabin Is A Reminder That You Get What You Pay For

Jenne, from Cape Coral, was reportedly set to fly from Fort Lauderdale to Washington D.C. when a flight attendant approached him and said, “You’re going to have to come off the plane. We’re not going to let you travel.”

When he asks why, he is told, “You’re not in mask compliance.”

Apparently, several people on the plane supported the 38-year-old’s mask defiance and walked off the jet with him in protest.

After leaving the plane, Jenne was met by members of the Broward County Sheriff’s Office.

“Eventually, they called TSA and airport security,” Jenne told NBC 2 News. “I ended up staying at the gate for about 45 minutes.”

Sky News reports that Jenne claimed he was wearing the women’s underwear to show the “absurdity” of rules requiring a face mask on flights.

“There’s nothing more absurd than having to wear a mask until I get to cruising altitude so that I can order Tito’s by the double and snack on pretzels, and illustrating that absurdity by wearing women’s underwear on my face sounds perfect,” said Jenne.

He also said that this isn’t the first time he’s been given the heave-ho from a flight as Delta Airlines kicked him off one of their planes for the same offense.

“I think the best way to illustrate absurdity is with absurdity,” he told NBC 2 News.

“Every single flight has been met with different reactions from the flight crew,” he said about previous panty incidents. “Some with a wild appreciation, others confrontational.”

United Airlines said in a statement about Jenne’s removal, “The customer clearly wasn’t in compliance with the federal mask mandate and we appreciate that our team addressed the issue on the ground prior to takeoff, avoiding any potential disruptions on the air.”

Jenne said he would be taking another flight, on a different airline, the next day.

“Hopefully, Spirit Airlines has a better sense of humor tomorrow,” he said.

Something tells me he won’t have any trouble with them.