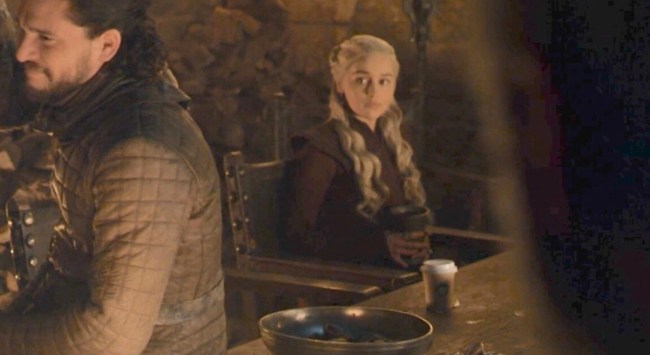 Following The Battle Of Winterfell that took place in episode 3, Game of Thrones fans were very curious to see what the HBO hit show would do to top it in episode 4.

Little did anyone know that the biggest story to come out of episode 4 would be a stray coffee cup.

While the cup wasn’t actually a Starbucks coffee cup, the Apex Marketing Group, which specializes in advertising and branding services, valued the misplaced cup at more than $11.6 million in free advertising for Starbucks based on social media mentions.

HBO has already started removing the cup from “The Last of the Starks” episode, having edited it out on HBO Go, and issued an apology for the crazy oversight.

Executive producer of Game of Thrones, Bernadette Caulfield, didn’t seem too concerned about the faux pas, however, joking about it during her appearance on WNYC’s All of It with Alison Stewart on Monday.

“I can’t believe [it happened] – our on-set prop people and decorators are so on it, a thousand percent,” Caulfield said on the show. “Nowadays, you can’t believe what you see, because people can put things into a photo that doesn’t really exist, but I guess maybe it was there!”

That Starbucks cup in Game of Thrones really broke the reality of a dragon-riding lady in love with a guy who came back from the dead.

People should wait till the series finale of Game of Thrones before they jump to the conclusion that the Starbucks cup doesn’t belong.

“We’re sorry! Westeros was the first place to actually have Starbucks – it’s a little-known fact,” Caulfield joked. “There’s always something. I guess if that’s the worst thing that they’re finding, we’re in good shape. Starbucks, send us money!”

Lord knows they can certainly afford it now.

Listen to the entire interview segment with Caulfield below…