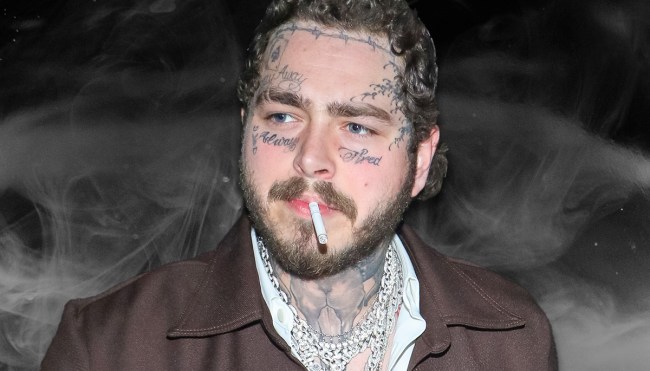 Post Malone has done pretty well for himself since bursting onto the music scene with “White Iverson” back in 2015, and while he’s certainly splurged on more than a few occasions after taking the world by storm, he’s still a man who can appreciate some of the simple pleasures in life.

Most people might not be able to relate to his love of face tattoos, but it’s safe to say there are plenty of others who share the artist’s appreciation for some of his other favorite things, like a classic Italian meal at his beloved Olive Garden, an ice-cold Bud Light, and a nice, comfortable pair of Crocs.

If you’re familiar with Post Malone, you’re likely aware he’s also a pretty regular cigarette smoker. However, what you may not know is just how intense that habit is, as the singer revealed some fairly shocking details during a recent appearance on the Full Send Podcast.

Post took full advantage of the fact that the venue where the interview took place apparently sympathized with the Cigs Inside Movement, as he had a dart in his hand for a good chunk of a chat where the habit eventually became the topic of conversation.

Here’s what he had to say after Kyle Forgeard asked him how many cigarettes he smokes on an average day:

“On a really terrible day—there’s a very fine line between a terrible day and a good day—40, 45.

By the time I ask [personal assistant] Ben [Bell] for that second pack, I’m like, ‘Alright, dude. Chill out.’ Right?  You know? But by the time I open that third pack, I’m a total piece of s—t and I need to go to sleep.”

Malone (who said he stopped smoking marijuana after a weed-induced panic attack) also estimated he’s gone through 80 in a day at some point.

He did acknowledge he was worried about the impact it could have on his voice, but added, “I mean, Johnny Cash smoked his whole life. He sounded cool, you know?” (it is worth noting Cash died of respiratory failure, although it was technically linked to complication stemming from diabetes).