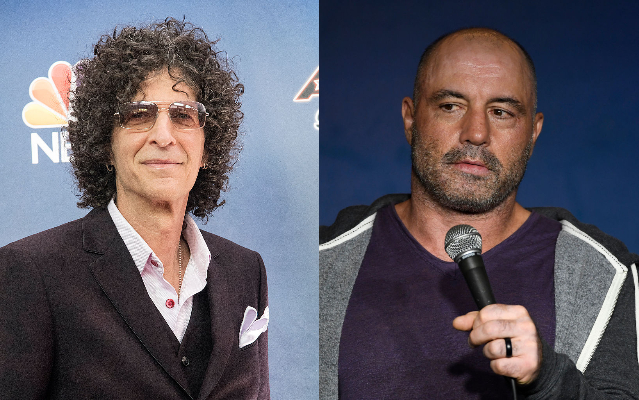 Howard Stern lashed out at Joe Rogan and unvaccinated Americans in a recent rant.

Joe Rogan announced that he was diagnosed with COVID-19 on Sept. 1. On Sept. 3, Rogan announced that he tested negative for COVID-19 after he “threw the kitchen sink at it” in terms of treatments, which included the controversial drug ivermectin. The FDA has said that people should not use ivermectin as a treatment for COVID-19. There is a human form of ivermectin, which is an anti-parasitic medication, and there is a version made for animals that is available as a paste.

There were numerous media outlets who stated that Rogan took “horse dewormer,” including CNN. Rogan torched the press for claiming that he was taking a medication meant for animals.

During an episode of his massively popular podcast, Rogan asked, “Do I have to sue CNN?”

“They’re making sh*t up – they keep saying I’m taking horse dewormer,” Rogan said. “I literally got it from a doctor.”

On Monday, Stern blasted Rogan for taking ivermectin, and spread the misinformation that the UFC color commentator was taking “horse dewormer.”

Stern said of the stand-up comedian, “I heard Joe Rogan was saying, ‘What are you busting my balls [for]?’ He says, ‘I took horse dewormer, and a doctor gave it to me.’ Well, a doctor would also give you a vaccine, so why take horse dewormer?”

“We have no time for idiots in this country anymore,” Stern added. “We don’t want you.”

“We want you to all either go the hospital, and stay home, die there with your COVID,” the SiriusXM radio host said, according to Variety. “Don’t take the cure, but don’t clog up our hospitals with your COVID when you finally get it. Stay home, don’t bother with science, it’s too late. Go f*ck yourself, we just don’t have time for you.”

“When are we gonna stop putting up with the idiots in this country and just say it’s mandatory to get vaccinated? F*ck ’em. F*ck their freedom. I want my freedom to live. I want to get out of the house already. I want to go next door and play chess. I want to go take some pictures. This is bullshit,” Stern scolded his audience.

Stern continued his tirade, “If you have a heart attack or any kind of problem, you can’t even get into the E.R. And I’m really of a mind to say, ‘Look, if you didn’t get vaccinated and you got Covid, you don’t get into a hospital.’”

RELATED: Howard Stern Finessed SiriusXM To Take Entire Summer Off After Signing $500 Million Extension And Subscribers Are Not Happy

In a 2019 New York Times interview, Stern says the two have their issues.

Stern admitted that he is a “fan of Joe Rogan,” but “never watched the entire podcast, but there’s tons of clips of him, and he does a really good job.”

When asked if there is an issue between him and Rogan, Stern replied, “Yeah, there is.”

“I was a fan of Joe’s comedy,” he said. “So I was a big proponent of his before he was a host on TV, before he got into MMA fighting or whatever. I used to have him on the show.”

“Joe was a guest one time and I said something to him off the air, which I won’t go into, but he took offense,” Stern vaguely said. “I haven’t heard or seen him since. I think he made the decision that I was toxic for him. But I hold no grudge.”

Stern said he hasn’t been invited on The Joe Rogan Experience, but he has asked Rogan. “I’ve asked him to come on my show, but he doesn’t want to, and I respect that,” Stern said. “It’s not meant to be.”

Howard Stern also claimed that podcast hosts are not as accomplished as radio hosts.

“When you are put to the test in a broadcast situation, where you have to bring in subscribers or get ratings,” the SiriusXM radio host suggested. “That separates you out. There is no greater judge of whether you have talent or not than to go on a commercial radio station and try to attract an audience.”