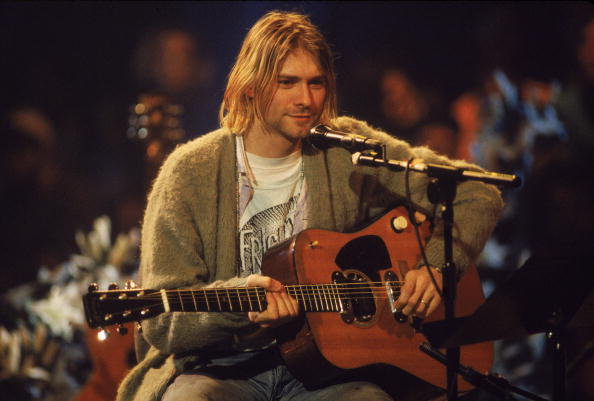 Kurt Cobain was not a fan of white people rapping. The Nirvana frontman went so far as to say white people shouldn’t and can’t rap. A lost interview has been unearthed where Cobain unloads on white rappers.

In a never-been-heard interview from 1991 that was never released until this month, Cobain tells us how he really feels about white people rapping. On September 20, 1991, only a few days before Nirvana’s classic Nevermind album was released, Robert Lorusso conducted an interview with Kurt Cobain. Lorusso asked Cobain about rap and white rappers and Kurt had opinions.

Lorusso asked Cobain about a quote from a 1991 interview with Billboard where he said, “I think rap music is the only vital form of music that has been introduced to music in a long time since punk rock. I would never do rap music. No. There’s just no sense in it. The people who do rap music do it just fine. I’m usually offended by people like Vanilla Ice and stuff like that. The white man ripped off the black man long enough. They should leave rap music to the African-Americans because they do it so well and it is so vital to them.” Cobain replied, “Oh I don’t know. Was I drunk at that time?”

Cobain continued in the newly unearthed interview that was done at the Opera House in Toronto, Canada, “I’m a fan of rap music, but most of it is so misogynist that I can’t even deal with it. I’m really not that much of a fan, I totally respect and love it because it’s one of the only original forms of music that’s been introduced, but the white man doing rap is just like watching a white man dance. We can’t dance, we can’t rap.”

Lorusso said he never released the interview until 27 years later because he was embarrassed of his interviewing skills or lack there-of. “This is a terrible interview,” Lorusso admits. “I am not feigning self-deprecating modesty when I say this, this is objectively terrible by all journalistic standards. It is so for the following reasons: 1) my questions were poorly crafted because 2) my research was incomplete and inaccurate.”

Lorusso reveals that he finally released the interview because “it’s still history, despite how poorly done the interview was,” and “my friends keep bugging me to post this trash fire” he wrote on the Dead City Beat Bandcamp website.

In 1991 there were top hit songs from white rappers such as Play That Funky Music by Vanilla Ice and Good Vibrations by Marky Mark and the Funky Bunch, so it’s hard to argue with Kurt’s logic at the time.

“Final take-away from that interview. As we spoke I got a vague sense that he wasn’t really enjoying their success. I couldn’t understand it. I was so enamored with and envious of his talent and success I just couldn’t understand how he could have been so indifferent to it,” Lorusso said. “A few years later it became very clear why. When I reflected on this experience, I realized that success doesn’t mean a goddamn thing if your world is falling apart. Depression is a cruel thief that bankrupts your life with one fleeting moment of joy at a time. It still bums me out.”

Cobain had praised one black entertainer in particular. During Nirvana’s iconic MTV Unplugged in New York performance in 1993, Kurt struggled to fit a proper song to cap off their show. The band asked the small crowd for ideas on what should be the last song, but the suggestions did not impress them. Kurt came to an epiphany (2:30-mark) and said, “Fuck you all, this is the last song of the evening.” Kurt then began strumming his guitar and said the song was a cover from “his favorite performer, our favorite performer.” Nirvana played a cover of Where Did You Sleep Last Night by Huddie Ledbetter AKA Lead Belly.

Lead Belly was a folk and blues musician who first recorded Where Did You Sleep Last Night in 1944 and it is a version of songs titled In the Pines and The Longest Train that are uncredited to any particular artist and date back to the 1870s from the Southern Appalachian area of the United States.

Cobain wrote in his notebooks that Lead Belly’s Last Session Vol. 1 is one of the 50 albums that were most influential on Nirvana’s sound. Leadbelly was inducted into the Rock and Roll Hall of Fame in 1988.