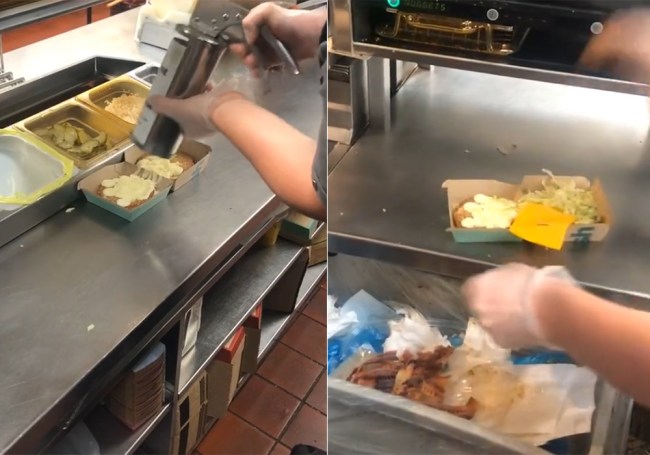 One summer, I worked as a painter. One of my coworkers – Ronnie – was a Jamaican-born guy in his early 40s.

Ronnie was a solid dude and had several personal rules he always followed. One rule I distinctly remember involved eating out at restaurants.

He never ate at restaurants.

“I’ve worked at restaurants,” he explained. “I know what goes on in the kitchen.”

His warning never kept me away from eating out, however, I’m always extra special nice to the staff. First, because they deserve the respect for working such a demanding job, and second because they touch my food and work closely with the other people who touch my food.

And I’ll never, ever, piss of a fast food worker. Of all the people in the food service industry, the men and women working in fast food get shit on the most.

This viral TikTok is a good example of the ramifications when ticking off a fast food worker before his shift ends.

The video shows nothing disgusting, thankfully, and the results could have been much worse after the customer showed up just before closing time at the local McDonald’s.

When eating McDonald’s at any time of the day, you’re taking a risk. A person could chip a tooth on a McNugget, eat a burger that never decomposes, or take a big bite of a face mask.

Ordering right before close is putting your life on the line. There’s not telling what’s going in your meal.

“When someone orders two minutes before close,” the text on video explains. The video is also captioned “just a joke, I promise.”

Overall, the sandwich doesn’t look that bad, and the customer is probably drunk, stoned, a few different levels of banged up, and probably won’t care too much to argue about the sandwich looking picture-perfect.

A bunch of commentors on the video claim that’s the way their sandwich always looks, even in the middle of the day.

“I thought this is what you normally do,” said one comment with another stating, “Dude, McDonald’s doesn’t care about the quality of food.”

Real talk for a second – where can a man like myself get a tarter sauce gun?