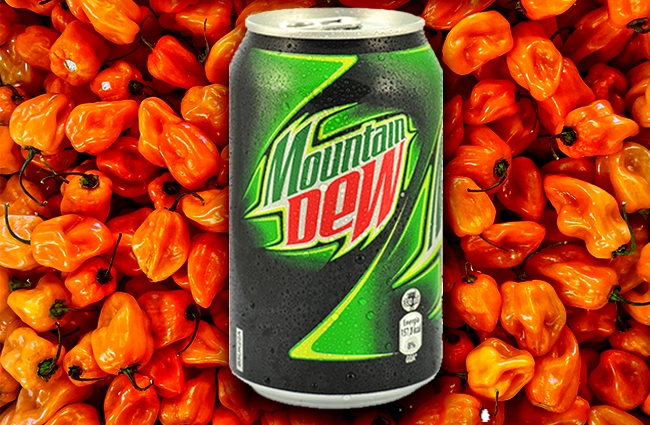 When Mountain Dew was first introduced in 1940, it was marketed as an ideal mixer for whiskey. However, the brand has evolved quite a bit since then, as it eventually morphed into the Official Drink of People Who Play MMORPGs For 12 Hours At a Time (in addition to the soda Caron Butler relied on to stay fueled before Kobe Bryant stepped in to help him conquer his addiction).

Mountain Dew has constantly dreamed up new flavors over the years but it’s recently begun to harness the sage advice of Wu-Tang Financial by coming up with some pretty unconventional ways to diversify its brand. Back in March, it announced it had entered a pretty natural marriage with Doritos in the form of tortilla chips dusted in a coating designed to mimic the taste of its flagship drink, and last month, it revealed it’d collaborated with Red Lobster to create a “DewGarita.”

It’s big. It’s green. And it tastes even more incredible than it looks! Introducing the NEW! DEW Garita💚👅 @MountainDew Get yours today*, along with all of your favorite PepsiCo drinks! #RedLobsterDewGarita * May not be immediately available in all restaurants. Please contact your local restaurant to confirm availability.

That beverage was designed to complement the chain’s hallowed Cheddar Bay Biscuits, but I’d assume that most people associate margaritas with Mexican cuisine as opposed to seafood—which makes Mountain Dew’s most recent innovation particularly fitting.

Earlier this week, the company announced it was teaming up with Joel Embiid and the aficionados at iBurn to concoct its very own hot sauce and gave Twitter users a chance to pick their preferred spice level (and, in turn, the type of pepper to serve as the base).

#DEWnation: it’s time to fire up your taste buds with an explosion of the DEW flavor you know and love. We’re partnering with @JoelEmbiid 🔥🔥🔥 and sauce experts @iBurn to release a limited edition MTN DEW Hot Sauce. Help us choose the flavor – voting ends September 30th.

As you can see, habaneros came away with the W, and on Thursday, Mountain Dew made things official when it teased the upcoming creation.

#DEWNation: you made your choice. Habanero it is🌶🔥. Now it’s time for us to get to work with @JoelEmbiid and @iBurn on the first ever DEW hot sauce. pic.twitter.com/FKDfconfc7

I have so many questions about exactly what to expect from this that won’t be answered until I get to try it myself, and as of right now, there isn’t much information out there aside from a disclaimer that it’ll be a limited released whenever it ends up being unleashed upon the world.

I can only hope we’re prepared for what’s in store when that day comes.