The Rock Worked Out With, And Talked Trash To, His ‘Jungle Cruise’ Castmates Emily Blunt And Jack Whitehall 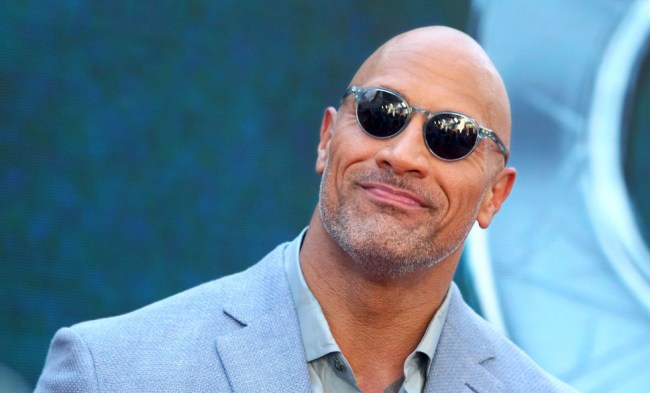 Dwayne Johnson is currently hard at work on his 4,872th film of this decade, Jungle Cruise. (Okay, it only feels like that, even though he looks the same in all of them.) And as is customary when he is on a movie set, The Rock brought along his 40,000 pounds of workout equipment with him.

Also, as is always the case when he is on a movie set, The Rock shared video of his workout, only this time he was joined in the “Iron Paradise” by his Jungle Cruise castmates Emily Blunt and Jack Whitehall. (The Krasinski family has been very busy.)

Now, considering the fact that Whitehall is a comedian, and The Rock is really, really good at talking trash, the workout devolved into Whitehall, The Rock, and even Blunt (especially her), busting one another.

The video begins with Blunt on an exercise machine where she says, “Hey guys, just hanging out here at Iron Paradise. The cast who trains together, stays together.”

Whitehall, who like Blunt is from England, then starts mocking The Rock’s American accent, “All me, all me. No pains, no gains.”

“Iron Paradise, just hanging out. I’m Dwayne Johnson, I like squats and shakes,” Blunt adds in her best Rock voice.

“My British voice is beautiful & sexy. Their ‘Rock voice’ is repugnant & nauseating,” Johnson wrote on Instagram. “The cast that trains together.. stays together. And the cast that talks smack to each other.. become LIFERS. Just your typical day in the IRON PARADISE with my JUNGLE CRUISE ohana, the relentlessly bad ass @jackwhitehall and the Incomparable One herself, Emily Blunt. Now bring it on in for a nice, long, sweaty, hug that goes on for way too long making it beautifully weird, while wearing 50lb chains. #MaryPoppinsAndMaui☂💪🏾 #JackIsABeast👊🏾 #IronParadise #JungleCruiseOhana #Lifers.”

Whitehall also shared a video of the actors’ working out, writing, “Finally got let loose in the Iron Paradise. Hard work and a lot of sweating and grunting but I fully expect to wake up tomorrow morning looking like @therock. It’s good that we’ve got to a stage now where we’ve spent so much time together that we are comfortable doing each other’s voices and Emily is calling Dwayne ‘toots’ – which he loves. great way to start the week and makes a change from my usual gym experience which is pootling along on an exercise bike for twenty minutes whilst listening to an audiobook. #2chainz #nopainnogain.”

“The downside of working out with Glutenus Maximus @therock is that he has all the machines set on beast mode,” Whitehall added. “A lot of this was going on.
He also has control of the sound system and so there was a distinct lack of Little Mix for my liking. When I invite him back to my local gym at the Putney Leisure Centre there will be very different sound track. #beastmode #painsandgains #GluteasaurusRex #gym.”

The Rock reposted the video with the caption, “Good God I love this sumbitch @jackwhitehall! He’s easily become one of my favorite workout partners! Even in deceit 😈💪🏾 #Quadzillas #IronParadise.”

What a fun life these people lead.