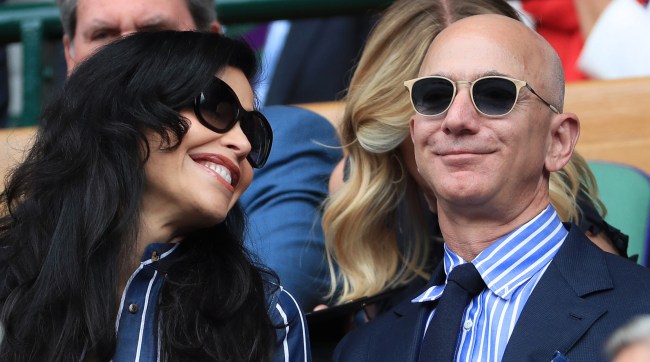 The sordid saga of Amazon CEO slash off-and-on wealthiest man in the world Jeff Bezos and his new girlfriend Lauren Sanchez is the gift that just keeps on giving.

Back in January, it was reported that Jeff Bezos was having an affair with his neighbor and ex-wife of NFL legend Tony Gonzalez.

Shortly thereafter, billionaire Bezos’ raunchy text messages to Sanchez, reportedly including nudes, were leaked to none other than the National Enquirer.

Many thought that perhaps Bezos’ scorned wife, MacKenzie Bezos, could be the one behind the leak in an effort to become the 7th richest person in the world.

Then a report came out that blamed Sanchez for the leak, sending Bezos’ sexts to a friend to show off her relationship and the friend turned them over to the Enquirer.

Two months later, the blame for the leak shifted and was being placed squarely at the feet of Lauren Sanchez’s brother Michael.

The Wall Street Journal reported that Michael Sanchez sold the very personal text messages to his sister from Bezos, including a “dick pic,” to the National Enquirer for $200,000.

Then, in yet another strange twist, Jeff Bezos’ head of security Gavin De Becker claimed Saudi Arabia was behind leaks of the Amazon CEO’s sexts to the Enquirer.

“I’ve never sold a photo to the National Enquirer or any publication,” he added. “Let’s cut to the chase, everything I did was to protect Jeff and Lauren’s love affair, and anyone who thinks money was the motive is an idiot.”

Like I said, this whole sordid saga is the gift that just keeps on giving.