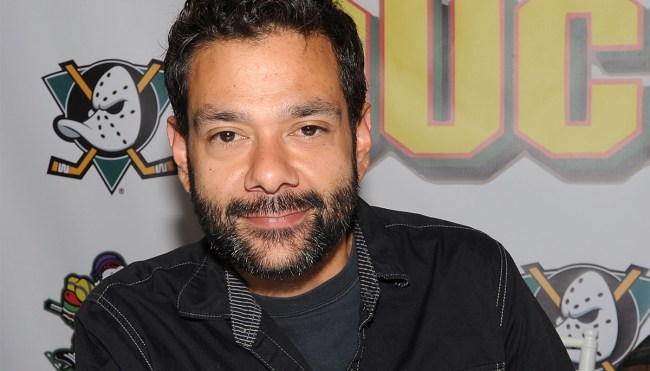 It’s been close to five years since Shaun Weiss became yet another in a long line of child stars to end up in the headlines for all the wrong reasons after he was jailed in connection to a robbery in Los Angeles, which turned out to be just one of the many legal situations he’d find himself at the center of in the ensuing years.

The actor who’s best known for playing Goldberg in The Mighty Ducks franchise looked unrecognizable in a mugshot that was taken following an arrest in 2018, but he’d appeared to finally managed to get back on the right track after seeking help a couple of years later and recently landed his first acting role following his impressive turnaround.

Now, Weiss—who recently celebrated 1,175 days of sobriety—has come forward to share his story, as he recently appeared on the Friends of Jerry podcast to detail his battle with addiction and shed some light on his path to redemption in an awesome in-depth interview.

During the conversation, Weiss revealed he never had any major issues with substance abuse and largely managed to avoid the trappings of the Hollywood lifestyle before things ultimately fell apart.

The discussion is filled with plenty of notable quotes, but here are some of the biggest takeaways.

The Definition of a “Drug Problem”

“I wouldn’t say I struggled with addiction. I always partied. I always used alcohol and marijuana. I never really found hard drugs until late in life.

The Beginning of the End

“It’s hard to really trace it back to a ground zero. What really was the crux of my drug addiction was a deep depression. Part of what led to this sort of cyclone of depression was I lost my father and I had a really bad breakup. This breakup really took me out in a way I’d never been affected emotionally before…

My depression became so heavy it felt like someone was sitting on my chest. I just lost my mind over this person. I found crystal meth, and the first time I used it, it took away this tremendous burden…It was really an escape for me. On some twisted level, I say that drugs almost saved me because if I didn’t have that release, I don’t know what I would’ve done…

I had never even seen hard drugs up until that point in my life. I entered an area where I was around people that were doing that kind of stuff and had access for the first time.

I’d always had someone to take care of; a family member, my parents, a girlfriend. For the first time, I really didn’t have anything holding me down. I had nothing to be responsible for. I had no one to be accountable to, and the wheels just fell off at that point. It’s a very fast downward slope.”

“I hadn’t seen my reflection for maybe a year. That took effort. it takes effort to avoid all reflective surfaces when you’re walking down the street, but I did it. I remember I saw that reflection for the first time in the mirror and it actually made me jump. I actually was startled by my own reflection.”

“My fans have helped me. At the height of my addiction, I got that way because I didn’t want to live. I lost my will to live. My drug addiction was really a slow form of suicide. I was unconsciously committing suicide.

The fan support was my first reason to even want to try to get sober. I was like, ‘Dude, all these people are pulling for you. You can’t just let them down.’

The Moment Of Realization

“My life hack to recovery is really simple. When I got into residential treatment, I was there through a court-ordered program, which means that if I didn’t complete it, I get a felony and I go to jail for three years. I had some good motivation to stay clean.

When I was in residential treatment, I kind of had this reservation in the back of my mind that I’ll just stay clean now, stay clean long enough to get these people off my back, and then me and my sweetheart will be back together again.

Around day 40 or 50, it just dawned on me that this mindset is not going to get me anywhere and that if I didn’t figure something out, I was going to either end up in jail or right back where I was.

Eventually, it happened. We were watching a movie in treatment one day and there’s a scene where the drug dealer comes out and he throws this big bag of dope down on the table. Typically, I’d see that bag of dope and my mind would start fantasizing. I didn’t want it. I started crying…

As for what’s next, Weiss teased a foray into stand-up comedy and suggested he may also host talks to share his story in the hopes he’s able to help others who find themselves in a similar position as himself.

You really, truly love to see it.