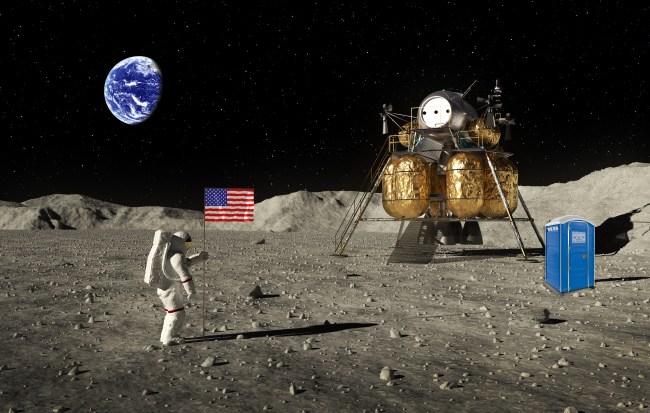 When the Apollo 11 mission landed on the moon some 50 years ago, millions of Americans gathered around their television sets to watch history in the making.

There were undoubtedly droves of people standing around in their living rooms crying out, “Hallelujah, they’ve made it,” while hard-nosed skeptics tried to convince anyone willing to listen that none of those bastards were actually on the moon, but somewhere in the middle of the fucking desert with a camera crew.

There was perhaps even a few curious types standing along the sidelines who were less interested in the idea that we had finally gone where no man has ever gone before, but how astronauts Buzz Aldrin and Neil Armstrong managed to take a dump while hurtling through space at speeds of almost 25,000 miles per hour.

“Hey Bill, how do you suppose those bastards are taking a crap up there in zero gravity? Can’t see how they’re getting any damn leverage.”

It would later be revealed that not only did the astronauts shit, piss, and vomit during their expedition, they chucked bags of it onto the lunar surface once they touched down.

The moon was used as a doo-doo dumping site presumably because the moonwalkers had no interest in riding back to Earth smelling each other’s butt nuggets. It was also done to comply with tight weight restrictions. So, they essentially had to ditch the shit to make room for any space souvenirs.

How did astronauts use the bathroom?

Well, they wore diapers to absorb their urine – can’t be pulling over every ten minutes because someone can’t hold their Tang — but adhesive fecal collectors were used for those annoying number twos.

This contraption looks sort of like a barf bag, only it gets taped to an astronaut’s butt cheeks.

Yeah, let’s hope they did some asscaping first!

While the thought of astronauts floating around in space ship trying to squeeze a hot Carl into a bag glued to their ass is fascinating in its own right – I mean, how did they get the leverage needed during those bouts of constipation? — it has nothing on the fact that scientists now want to travel back to the moon so that they can collect the lunar poo bags and put the contents under a microscope.

Yes, believe it or not, there are scientists out there right now who are so goddamned bored with trying to make important leaps like finding a cure for cancer and AIDS that they actually want to dissect decades-old space turds to see how life prevails beyond Earth.

These fecal geeks believe the answer to the question “what happens to poop in space?” might be useful when it comes time for humans to shit themselves all the way to Mars. We hope by then there is a more civilized method for using the bathroom.

We can’t believe that they can send a man to the moon, but they can’t come up with anything better than a sticky plastic bag for when freeze-dried meals don’t agree with the stomach. “Goddamn Neil, make sure you double bag that one!”

Fecal matter is relevant to the future of space travel, researchers say, because it is full of life.

There are thousands of bacteria living in our guts, which continue to exist even after they come firing out of our large intestine strapped to a brown missile. This means that when the astronauts shucked all of those bags of excrement onto the lunar surface, they unwittingly released a significant amount of microbial life from Earth.

If that bacteria is still alive and kicking today, scientists believe it could provide them with information on how life prevails in the most savage conditions. They also think it could show them how to seed life throughout the universe, which as best we can tell, sounds like NASA is looking to human shit for how to sustain life on other planets.

But for this research to be successful, scientists have to find butt bacteria that was able to survive all of this time on the moon.

Since none of the gut germs can grow without moisture, scientists connected to the project say that the shit bags would still need to be packed tight and remain unaffected by the drastic temperature changes that happen up there.

So, there is a solid chance that all the life that was left on the lunar surface is now just a bacterial graveyard of grey butt dust marking a time in history when humans touched down and wiped its ass on a cosmic rock.

This could be the plot for a new Alien movie. After all, who wouldn’t want to see a flick about humanity fucking itself royally by having the ambition to go balls deep into the realm of space travel and the arrogance to shit on it after the fact.

Perhaps this scenario has already happened. Maybe that goddamned manure monster made its way back to Earth years ago and has since crawled up inside an unsuspecting host and that piece of shit is now running the country?