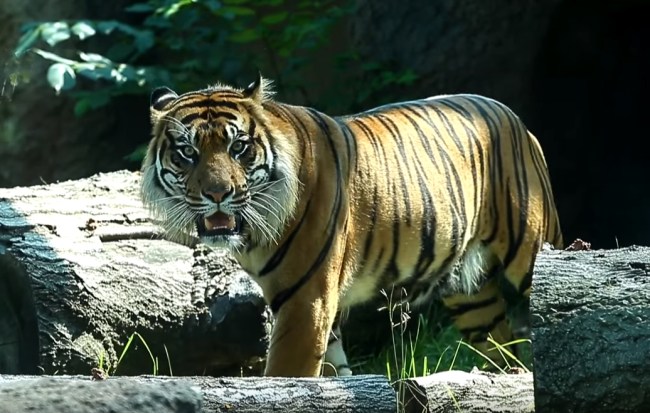 An employee of the Topeka Zoo was mauled by a Sumatran tiger. The tiger attack happened Saturday morning and the zoo worker is in critical condition after the attack.

Around 9:30 a.m. on Saturday, a Sumatran tiger named Sanjiv attacked the worker. The male tiger and the female worker were in a secured, indoor space. Despite being in the indoor space, some zoogoers witnessed the animal attack. The zookeeper was immediately taken to the hospital by ambulance. Topeka Zoo director Brendan Wiley said the employee was awake and alert when she was taken by ambulance to a hospital.

Wiley said he did not know the extent of her injuries, but there are numerous reports that the woman was in critical condition. The worker’s identity has not been released.

BREAKING: CBS News has confirmed that a trainer at the Topeka, Kansas zoo has been attacked by a tiger. The trainer has been taken to the hospital in critical condition.

The zoo reopened about 45 minutes after the attack. But the tigers were kept in their holding cells. “We are back open, our tigers are in a holding cell, but the rest of the zoo is open,” Topeka Zoo spokeswoman Molly Hadfield said.

BREAKING: The Topeka Zoo is back open after one of the keepers was attacked by a male tiger. A spokeswoman for the city told me the keeper was alert while being taken to the hospital, but no word on what their condition is at this time. We will provide updates as we learn more. pic.twitter.com/UKHJuJJPBn

In August 2017, Sanjiv came to the Topeka Zoo in northeastern Kansas when he was transferred from the Akron Zoo in Ohio.

“He comes from the Akron Zoo and we’re very excited to welcome him to his new home,” the Topeka Zoo said when they welcomed Sanjiv. “It will be a little bit before guests are able to see this handsome boy but we will provide you with updates!”

RELATED: Rhino Poacher Trampled To Death By Elephants And Then His Body Was Devoured By Lions