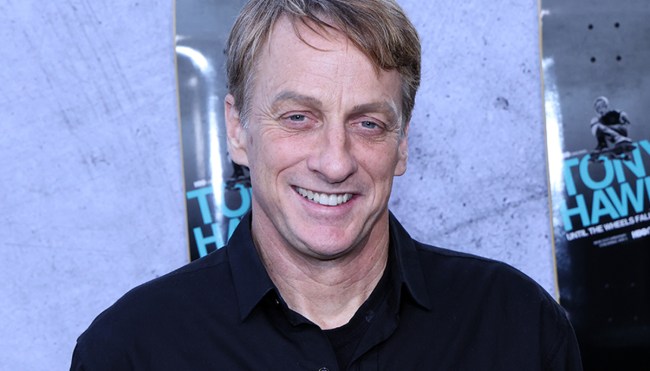 If you grew up in the ’90s, you had an incredibly deprived childhood if you didn’t devote at least some of your formative years to trying to master the art of fingerboarding with the help of the miniature skateboards that were all the rage in middle school cafeterias around the turn of the millennium.

That fad may have eventually fallen out of fashion, but now that Gen Z has decided baggy jeans, fanny packs, and other relics from that era are cool again, it’s only natural that Hot Wheels has decided to resurrect the tiny toys with the help of a man who knows a thing or two about skateboarding: Tony Hawk. 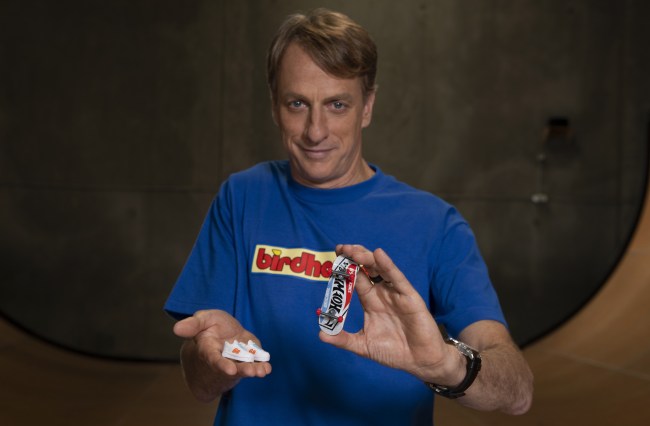 I was lucky enough to get to talk with the most legendary figure in skateboarding history prior to the grand debut of the Hot Wheels Skate lineup he helped bring to fruition.

During the conversation, he addressed a wide variety of topics, including how his skills on a normal board compare to his ability to shred miniature skate parks with his fingers, the one Pro Skater level he’d love to take on in real life, and coming to terms with the fact that his best days might be behind him after suffering a brutal injury a couple of months before his 54th birthday.

BroBible:  Tony, it’s an honor to get to chat with you. Can you give me the lowdown on your new project with Hot Wheels? It transported me straight back to 1998.

Tony Hawk: Hot Wheels approached me about doing a whole line of fingerboards, including play sets and skate parks, and I was excited because I’ve been a fan of Hot Wheels since I was a kid.

I would make my Hot Wheels track into a loop and send cars through it. That was my inspiration for doing a real loop on a skateboard. That’s no lie.

When they approached me about doing fingerboards, I just thought it’d be so cool to explore their ideas. They came up with the idea that you can have shoes on your fingers that are attached to the boards, so it’s not such a steep learning curve to learn how to do the tricks and the kicks because the board is attached to your feet.

As someone who was awful at skateboarding and fingerboarding when I was growing up, I’m curious if your skills translate to a smaller scale or if there was a big learning curve for you as well.

Well, I’ve seen people that excel in both, but I can’t say that it’s a natural crossover.

The people that devote their time to it are amazing. The kind of tricks they can do—to get the board to flip and catch and do grinds—it’s always been amazing to me. I was never proficient at it, so I can’t say it was an easy crossover.

I like the idea of the board being attached to your fingers. 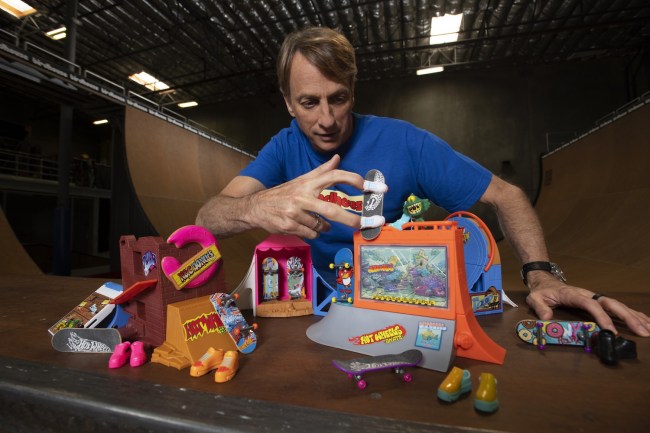 When I was a kid,  I’d always do handplants with my fingers on my school books before fingerboards even existed. Now I can do actual handplants with it because they’re attached.

I remember ripping the clip off of pens and using them as skateboards on textbooks.

What’s the most advanced trick that you can pull off on a fingerboard without the shoes?

Without the shoes? Oh wow. I don’t know.

I tend to lean into more vert skating, so I’d say a Blunt to Fakie.

You had a pretty gnarly accident earlier this year. How’s the recovery going?

Yeah, I’m four months out from a broken femur. My limp is less pronounced now and I’m able to skate a little bit.

It’s a slow process for sure, but I shot a commercial at my ramp yesterday and there was skating involved and I managed to pull through. So, I can’t complain.

It wasn’t the best skating I’ve ever done, but I did it.

You sort of alluded to this when you shared a picture of the X-ray, but what has it been like to come to terms with the things that you can’t—or maybe shouldn’t—do as you’re getting older?

I had come to terms with not being able to do a lot of things before I got hurt, but this changed my perspective dramatically, because now I don’t take anything for granted.

I won’t be careless with my skating, which I definitely was when I got hurt. I was trying something that I probably shouldn’t have even considered and I just somehow thought I was being invincible at the time.

It’s also just been massively humbling because there are tricks now that I just wish I could do that were so easy for me five months ago. They were nothing. They weren’t dangerous, they didn’t require much effort, and now, they are the most frightening things I could think of.  So I have a deeper appreciation for what I used to be able to do.

The way that my skating goes these days is that I go out on the ramp and I try to get my leg working. It takes me about 20 minutes just to get it to sort of function the way I need it to. Then, I get about a half hour of strength from it, and in that half hour, I will relearn a basic trick.

The other day, I relearned how to do a Lien air. If you had told me a year ago, that it was going to take me all day to do one Lien air, I would not have believed you.

To touch on that, is there anything related to skateboarding that you haven’t been able to achieve or have you sort of checked all of the boxes?

Well, there were tricks that were always on my bucket list or in the back of my mind that I just never could do, but I had let those go already.

I revisited that through the years. At some point, I realized it’s just not gonna happen. Now, I can barely do a 720 holding on to my board, so there’s no way I’m going to be able to do it without my hands.

You arguably—I would say inarguably—played the biggest role in legitimizing what was once viewed as a countercultural hobby and helping it become a mainstream sport. With that said, it feels like skateboarding sort of reached its apex in the early 2000s. Are there any factors you think could play a role in the return to the glory days when the X Games were all the rage?

I think a big thing is that it’s just permeated so much of pop culture. Now, kids choose to skateboard as readily as they choose to play baseball or soccer, so I do feel like it’s reached a tipping point of being here to stay.

As far as what could cause a new resurgence? I mean, there was a whole scene in Stranger Things about kids skating in a ditch in the ’80s. That was cool. They recognized that it was the outcasts that were doing it back then; it showed that skateboarding did exist in that era and that it has come so far and become something that is much more widely accepted.

Maybe that was the kind of push it needed. I feel like there are different milestones over the years that really moved the needle. Back to the Future was one of them. That inspired a generation of kids to start skating in the ’80s.

Pro Skater was another one, for sure. There’s also the success of Supreme, which started as a skate shop and drove skateboarding to new heights.

Speaking of Pro Skater, there’s an awesome video of you skating a recreation of the Warehouse level. If you could give another location from any of the games the same treatment, what would it be?

I mean, some of the gaps would be scary—especially the rails that go across the big chasms—but that downhill half pipe looked like so much fun.

Your stories about fans and strangers not realizing they’re talking to you or confusing you with someone else have sort of become a thing of legend over the years. What’s the most baffling mixup you’ve dealt with; one that made you think, “How could someone possibly think I’m that person?”

I got asked if I was Tom Brady one time. I was like [gesturing to his face], “Are you seeing this? You see this, right? That’s not what you associate with Tom Brady.”

But I was honored. I was like, “You’re my favorite person today. Thank you for that.”

Portions of this interview were edited for clarity.