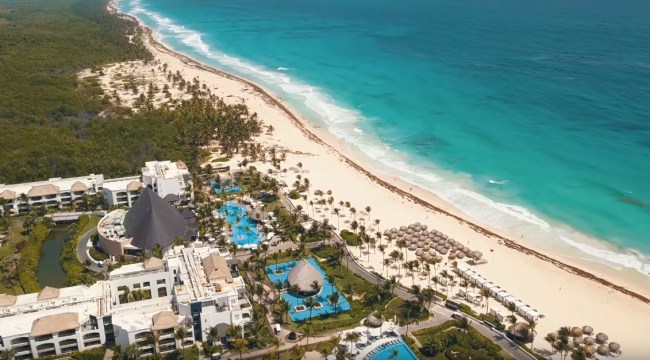 There have been at least 14 American tourists who have died since April of 2018 while vacationing in the Dominican Republic. Some of the deaths have been from natural causes, but others seem to have come under mysterious circumstances. The chairman of the Hard Rock resort chain has come up with a reason as to why there has been a rash of tourists dying at Dominican resorts — water.

Jim Allen is the chairman of Hard Rock International and says his company operates in 75 different countries including the Dominican Republic. The Hard Rock Hotel and Casino Punta Cana has been one of many resorts to have been involved in the recent string of American tourist deaths. Allen recently appeared on CNBC’s Squawk Box news show and was asked about the tourist deaths on the Caribbean island.

Allen acknowledged that bookings for the Hard Rock Punta Cana are “down in excess 20 percent.” Then the Hard Rock chairman said that the media coverage on the deaths had much to do with the negative outlook about vacationing in the Dominican Republic.

“I think its frankly it’s part of today’s media cycle,” Allen explained. “There have been seven deaths over the last year and a half and certainly, they will be investigated. We have to wait for the Dominican to come back with specifics on all of those unfortunate passings.”

“I think this is the classic case of how important it is to make sure accurate information is reported to the general public,” Allen said. “But also it’s one of the challenges of being in a country like the Dominican. Their ministry of tourism has come out, made some public statements last week. When you really study the numbers, and it’s important to understand what numbers are factual and which ones are being exaggerated.”

RELATED: 38-Year-Old Mother Of 4 And Pizzeria Owner Are The Latest American Tourists To Die In The Dominican Republic

The “numbers” that Allen is talking about is that it doesn’t seem to be a spike in unnatural tourist deaths in 2018 or 2018 compared to previous years. The Dominican Republic’s Ministry of Tourism released a statement where they quoted this statistic: “In 2017, the rate of tourist incidents was 1.6 per 100,000 visitors. In 2018, that rate dropped to 1.4 per 100,000 visitors.”

That being said, many of the recent Americans who have died were in their 40s, 50s and early 60s, and they all seemed to have the same symptoms: light-headedness, fever, sweating, loss of balance, nausea and stomach cramps. Also, a good deal of the tourists all had the same cause of death: pulmonary edema (liquid in the lungs) and heart attack.

When asked about the causes of these suspicious deaths in the D.R., the chairman of Hard Rock referenced “water.” “The reality is that when people travel abroad, people get sick simply many times by just drinking water that’s different here than what we are used to in the United States,” Allen told CNBC on Friday.

Ah yes, as we all know, water causes heart attacks. It’s science. Drinking water in a Caribbean island or Mexico and getting Montezuma’s Revenge and being glued to a toilet for two days straight is understood. Getting a heart attack and dying from “different water” is something that doesn’t make too much sense.

It’s also odd that Hard Rock resorts in the Dominican Republic and Mexico removed alcohol from the minibars last week. If “different water” is the culprit in these deaths and not tainted or bootlegged alcohol then why was there a sudden rush to remove alcohol? Many believe that alcohol served at these resorts is tainted with methanol or it could be from dangerous pesticides used on the resorts.

Another suspicious cause of death was given by Dominican authorities who said 49-year-old Cynthia Ann Day died from “shock” after her fiancé Nathaniel Holmes died while on vacation in the Caribbean nation. FBI have launched an investigation into the tourist deaths.

A group of high school graduates got violently sick at the Hard Rock in Punta Cana last month and had to be hospitalized.

At least two American tourists have died at the Hard Rock Hotel & Casino Punta Cana over the past year. In July 2018, 45-year-old David Harrison died of a heart attack at the Hard Rock while he was celebrating his wedding anniversary with his wife and son. Robert Bell Wallace, 67, died while staying at the Hard Rock resort in Punta Cana after he had a drink from the room’s minibar in April.

The discussion about the Dominican Republic begins at the 6:07-mark.

Tourists aren’t the only ones worried about dying in the Dominican Republic. Singer Rick Springfield has canceled his upcoming concert event at the Hard Rock Hotel & Casino Punta Cana.

The 80s singer canceled his “Rick Springfield & Friends” event in Punta Cana and rescheduled it at the Hard Rock Hotel Cancun. The event has been going on for years with a different Caribbean locale. This was the first time that the concert event was to be held in the Dominican Republic.

The event will feature Patty Smyth, Mark Goodman, Doug Davidson, and the band Guns & Mullets. The new concert will happen sometime in 2020.