TIL: The Band Ween Once Wrote A Rejected Jingle For A Pizza Hut Commercial 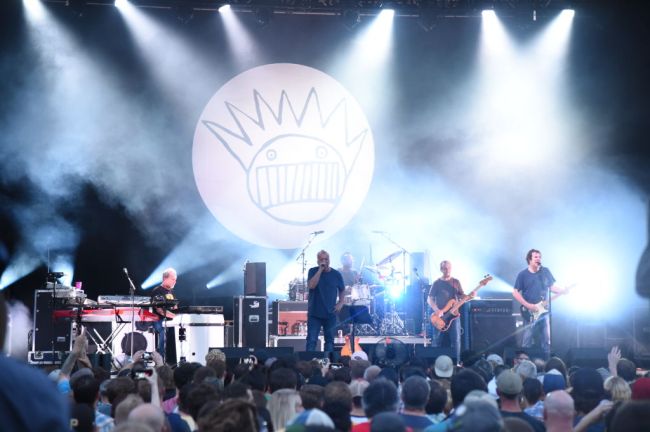 For example, Papa John’s just brought back the SHAQ-A-RONI pizza, a “larger than life pizza” collab with Shaquille O’Neal that features extra pepperoni. Or the Domino’s chicken taco and cheeseburger pizza, unveiled last year in the middle of a record-setting year for the pizza chain, now officially the largest pizza chain in the world.

But no one out pizza’s the ‘hut when it comes to unconventional advertising concepts. Currently, Pizza Hut is leaning heavily into nostalgia with throwback Tiffany lamps and iconic red cups. Earlier this year Pizza Hut celebrated the 25th anniversary of the stuffed crust pizza – an OG pizza marketing innovation – with a limited edition Nothing But Stuffed Crust concept in select markets.

Who can forget some of Pizza Hut’s other greatest hits, like the Hot Dog Stuffed Crusted Pizza or the Mac and Cheese Pizza?

In the early 2000s, Pizza Hut unveiled a concept called “The Insider” pizza. This pizza novelty contained a base crust, along with a layer of six types of cheese, a thin layer of dough on top of that, additional cheese, and toppings. The Insider was basically a pizza cake that looked like this: 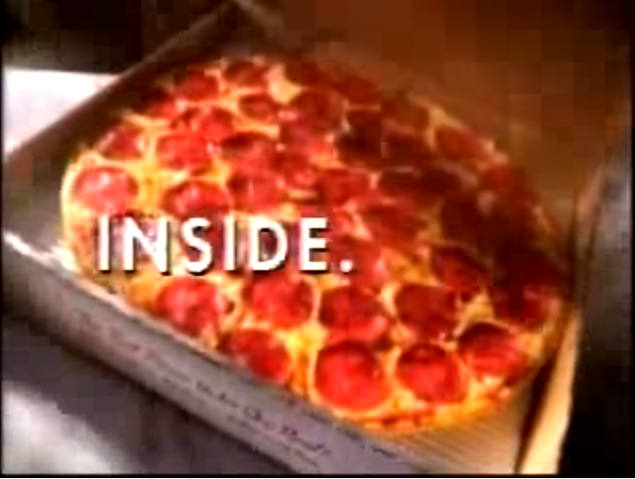 According to Ad Week, Pizza Hut spent $40 million on an advertising campaign marketing The Insider after it rolled out nationwide in Fall 2000.

The brand originally wanted to cram a Riverdance troupe into an elevator for a commercial – which was all the rage in 2000 – but settled for an oversized elephant and Sumo wrestlers. Here’s the final commercial the brand landed on:

A couple of years later, Pizza Hut made another push for The Insider. This time, the advertising minds at Pizza Hut recruited the alt-joke rock band Ween to write a jingle.

…Except it turned out to be a complete disaster.

Despite Ween’s mainstream cultural appeal at the time, frequently appearing on MTV and in an episode of South Park Season 2, someone in Pizza Hut’s corporate communications department didn’t get the memo about Aaron Freeman and Mickey Melchiondo’s overall sense of humor and whimsical songwriting style. Perhaps someone glossed over the fact that many of the band’s greatest earworms are satirical in nature – IE: 1992’s “Poop Ship Destroyer” or “Piss Up A Rope”, a catchy parody of a honky-tonk song.

The bedrock of the Ween musical universe is built on folly – a damned sense of laughter, a celebration of all things brown.

I guess the advertising powers-that-be at Pizza Hut decided that New Hope, Pennsylvania’s greatest rock act wasn’t a good fit and decided to go another direction – corporate-speak often used to politely tell someone they think their ideas suck.

“Earlier in 2002 we were hired by the largest advertising firm in the country to write music for a Pizza Hut commercial. Pizza Hut had hired them to come up with a whole new image to promote their new Pizza, “The Insider” which had all the cheese inside the crust.”

“In keeping in line with their new cutting edge image, the agency hired Ween to do the music, and we delivered in a big way. Unfortunately, they didn’t like a single piece of the 6 tunes we submitted and they had us rewriting the song every day for a couple of weeks before they hired someone else. In my opinion, it is one of the best tunes we wrote all last year.”

All this backstory leads up to the Ween song “Where’d The Cheese Go?”

Rejected by Pizza Hut for their advertising campaign, the ditty lives on as a masterpiece of everything that makes Ween great.