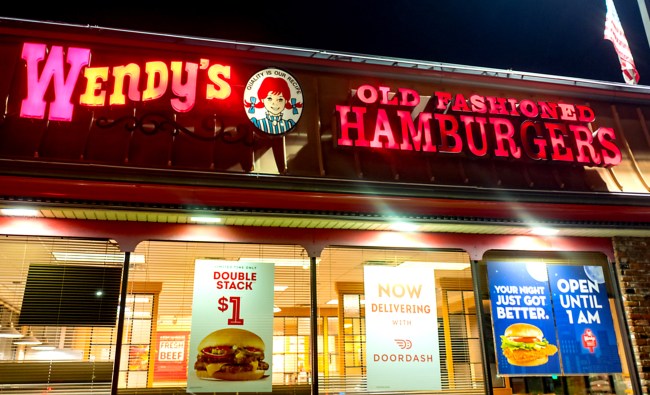 When are fast food companies going to learn that coming at Wendy’s on social media is an effort in futility? Burger King tried and got ethered. (Burger King is a favorite target of Wendy’s on social media.) They murdered McDonald’s over their constantly broken McFlurry machine and a poor Black Friday tweet. They went after Hardee’s so hard that Hardee’s blocked them. They’ve even forced a poor Nebraska football fan to delete their Twitter account.

Apparently the folks over at Dunkin’ either were unaware of how dominant a social media game Wendy’s has or they decided to just take a shot at the queen and see what happened. Either way, it didn’t work out well for them.

Dunkin’ has been posting photos on social media of someone in a donut costume standing outside various fast food restaurants in an effort to promote their new Spicy Ghost Pepper Donut.

McDonald’s (as we have seen) and Popeye’s are easy targets. However, Dunkin’ then went and fired a shot at Wendy’s with a photo outside one of their restaurants holding up a sign that read, “Listen to the life-sized donut: You don’t have to settle for spicy nuggets. #DunkinSpicySide.”

Here’s some advice about spice: It’s always better on a donut (like the Spicy Ghost Pepper Donut). 🔥🍩 #DunkinSpicySide pic.twitter.com/gcdvThyXpK

Stick to pushing the food that’s so “good”you took it out of your name.

My grandma has more heat in her roasts. https://t.co/4dyDghYTTz

Ouch. Then, just to pile on, Wendy’s, as they always do, went for the jugular.

Not even gonna argue about the nuggets? Ok we see you!

why wake the bear? just let it sleep. lol

It's not hate, it's clout chasing. Pretty common these days tbh

come at the queen, you best not miss