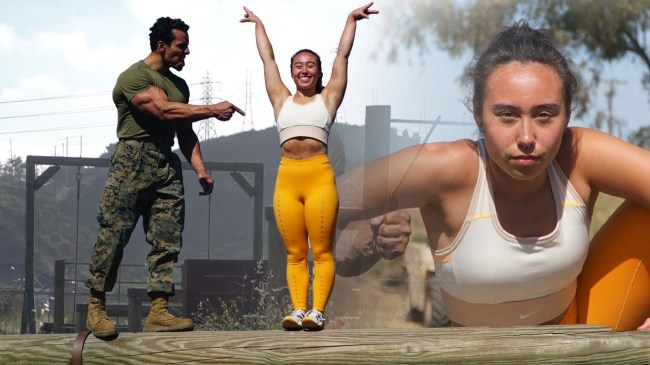 Turns out, at least according to YouTuber and active duty Navy sailor Austen Alexander who led the drill, Ohashi was “a champ.” (But we already knew that.)

While her lack of height at just 4-foot-10 certainly put her at a disadvantage on several portions of the course, Ohashi’s tremendous balance and strength definitely helped her in others.

The first thing Alexander puts Ohashi is just a practice runthrough, which she appears to have a little trouble getting sorted out.

“I swear, at one point I did gymnastics,” she laughed after one hard wipeout.

Surprisingly, she had a difficult time with the “college boy roll” portion of the course which involves grabbing a high bar and rotating your entire body around it one time.

Overall though, with a little assistance on the portions of the course where she’s “vertically challenged” Ohashi did pretty well with Alexander at one point complimenting her on her “exquisite dexterity.”

“I’m tired, man,” she said when it was all over. “You can tell I’m out of retirement, I need a little bit more practice on this, then I’ll be ready to go.”

That was a very impressive run by Alexander, but cash money says there’s no way he can do this…