#yachts
BroBible may earn a commission if you buy a product or service via links in this article.
by Cass AndersonFebruary 25, 2019 9:05 am 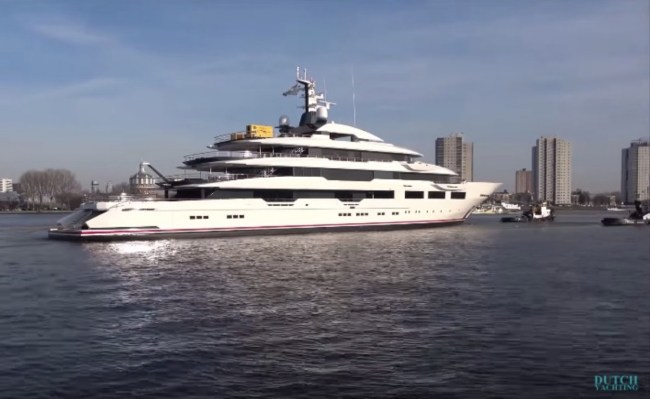 Atlanta Falcons owner is estimated to be worth nearly $5 billion. He was the co-founder of Home Depot in the late 1970s and this has led to unimaginable wealth, a fortune that’s enabled him to purchase the Atlanta Falcons and the current MLS champions Atlanta United.

There has been a definite surge in NFL owners purchasing high-profile yachts lately. Washington Redskins owner Dan Snyder spent $100 million on a superyacht with an IMAX theater inside. Dallas Cowboys owner Jerry Jones dropped $250 million, a quarter of a billion dollars, on an absolutely stunning 360-foot yacht.

Not to be completely upstaged by his peers, Arthur Blank just purchased a 240-foot yacht for $180 million from Netherlands-based yachtmaker Oceanco. According to TMZ, Blank was very much involved in the shipbuilding process and flew to The Netherlands several times to meet and consult with the ship makers.

This 240-foot yacht has 11 cabins to accommodate 23 guests in addition to 33 crew members. Arthur Blank has named his new yacht DreAMBoat with the ‘AMB’ capitalized as those are his initials.

The boat’s deck features the usual luxuries you’ll find on a yacht including a pool and hot tub. There is another hot tub in the master suite as well.

According to TMZ, the boat was recently filmed (above) hitting the water for the first time and it will soon head out to sea for open water trials where it will be tested to see if it’s seaworthy. After that, it’s unclear if Arthur Blank will want to leave his yacht in Europe for summer vacations of if he’ll have it delivered to him on the East Coast somewhere.

Blank bought the Falcons for only $545 million back in 2002 which is insane to think that just spent 1/3 of that on a boat, albeit a totally badass boat, but it’s still just a boat and not an NFL taem that brings in huge revenue every year.