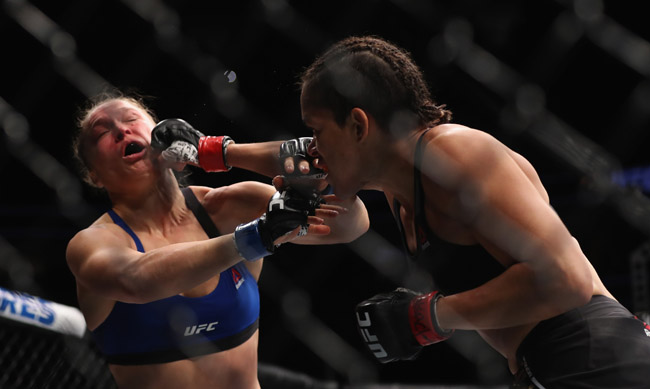 After Amanda Nunes crushed Ronda Rousey in 48 seconds at UFC 207 to retain the UFC woman’s bantamweight title back in December, she spent the next month pouring salt in the wound. Nunes, who likely felt jilted by the fact that Rousey made $3 million to her $200,000 for the fight, called the 29-year-old Rousey “overrated” and expressed her befuddlement with how Ronda’s previous opponents lost to her. Oh, and there was this tweet that Nunes shot out on the night of the fight. Ouch.

Ronda’s future in fighting is up in air, as she is already a millionaire and her mother called for her retirement by saying “let stupid people get punched in the face.” Not to mention, Ronda isn’t exactly polished in taking L’s, evident in her having suicidal thoughts after the Holly Holm loss. Recognizing this, Amanda Nunes changed her tune by posting an apology note to Rousey on Instagram.

Let me take a moment to explain myself. I was overwhelmed with adrenaline, emotion and hurt at the time. I held so much in during the weeks prior to my fight with Ronda. I might have said or posted some things at the time that I now realize was not the right thing to do. I want to apologize to Ronda. Her fans and mine and the UFC as well. Ronda is an amazing athlete and has done so much for this sport, especially for the women.

Sure, this is a nice gesture by Nunes, but it kind of seems self-indulgent considering it was posted over a month after the fight. Nunes spent weeks beating a dead horse and throwing fuel on the media flame, but plays the ‘sorry for acting up after I beat you’ card when she’s not grabbing headlines anymore. Not sure how I feel about that.