Hold Up, Is Andrew Luck Returning To The Colts? One Fan Claims He’s Got Texts From QB’s Wife Hinting At It 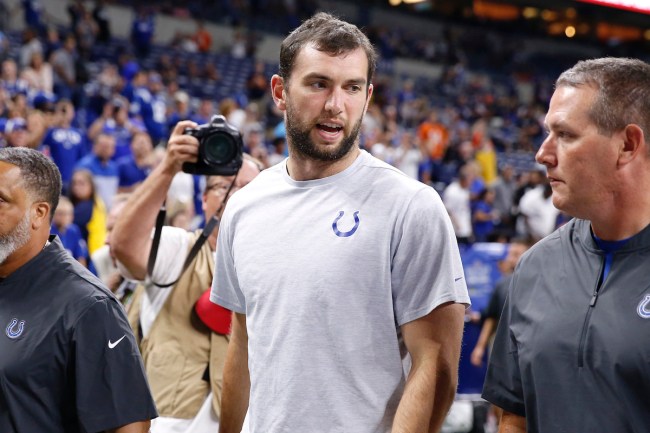 When Andrew Luck abruptly retired during a preseason game before the 2019 season kicked off, it’s safe to say the entire sports world was shocked. After all, this was a guy who was the No. 1 overall pick in the 2012 NFL Draft and lived up to expectations of replacing a legend on the Indianapolis Colts, Peyton Manning. He was a guy who was on his way to becoming a Hall of Famer. He was still just 29 years old when he called it quits, and seemed to have plenty of years left in the league.

Unfortunately, Luck didn’t see it that way, and he walked off the Colts’ field in street clothes for the final time… or was it?

Like any great athlete who retires early — looking at you Michael Jordan and Rob Gronkowski — there’s always hope (whether false or not) that a guy might return. While the former Indianapolis Colts quarterback has stayed silent since retiring, that hasn’t stopped people from at least speculating, hoping and just wondering if he’s return to the Colts at some point. In fact, with the Colts looking for a new quarterback this NFL offseason, team owner Jim Irsay was asked about the chances Luck comes back. Here’s what Irsay said in December to NFL.com.

“Coming back? I don’t know. He’s pretty happy in retirement life. He’s just enjoying it and enjoying it with his daughter, Lucy.

“I don’t think we will (see him). He’s just enjoying himself. I’m happy for him.”

“I mean, anything’s possible, and he’s still friends with the organization, and we all still have contact with him,” Irsay said. “Some of the guys, like (left tackle) Anthony Castonzo or T.Y. know a lot more than some of the newer guys. But look, he was a great player and everyone has to go down the path they think is right for them and their family, and you always respect that.

“So, I love Andrew, I wish him well. He’s raising his daughter, Lucy, and I just hope for him to have an incredible life and that sort of thing. But I don’t see it coming back around. If it did, then great, that’d be a great story. You know, Jordan was gone for two years and then back.

While Jim Irsay’s comments don’t exactly instill a vote of confidence that Andrew Luck will return to the Colts, it at least puts it out in the universe. People have spoken things into existence before, so, just maybe, the billionaire owner can do the same with his former signal-caller.

If you’re somebody who believes in that sort of stuff (Note: I do), then this Colts fan alleging to have have texts from Luck’s wife and hinting at a comeback will perk you up a little bit. Take a look at the exchange below, with the exchange apparently happening a few days ago.

@RickardonSports my wife has a mutual friend with Nicole’s best friend which is the wife of Andrew. I think this answers a lot of our questions. This was Sunday or yesterday I’m not sure pic.twitter.com/Ey1VijnU8f

So did Andrew Luck really meet up with Jim Irsay to talk about a return to the Colts? I mean… it could definitely be possible. As mentioned before, this NFL offseason has the potential to be the craziest quarterback carousel fans have ever seen, so maybe Indy gets their man back and restores faith in the fanbase again.

The Colts reached the postseason with an aging Philip Rivers under center this season, so maybe Luck sees a Super Bowl window in the next few years that’s just too good to pass up? If it happens, props to this random fan for having the intel.