Andrew Luck Is Coming Back… To School, For His Masters Degree: Fans React 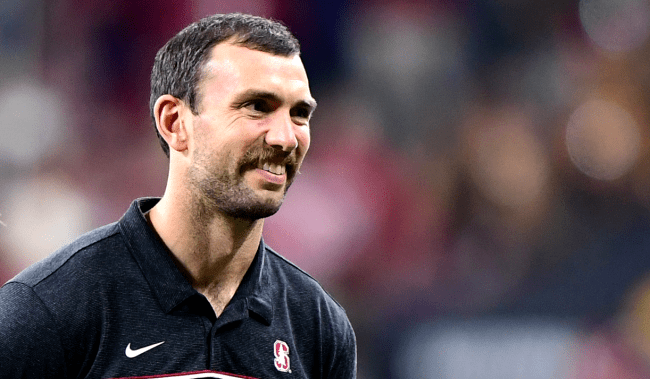 It has now been four years since Andrew Luck left the Indianapolis Colts and went into retirement.

Since that time, the former Stanford standout has been, according to former teammate T.Y. Hilton, having “the time of his life.”

He’s been spotted rocking zip-up cargo shorts, been the subject of a rap single performed by Antonio Brown, appeared on ESPN’s National Championship coverage (looking very skinny), and according to David Shaw, Luck’s former coach at Stanford, “doing better than all of us combined.”

Shaw, who loves to talk about Andrew Luck when he appears on podcasts and radio shows, did so again this week during an appearance on The Rich Eisen Show.

“He’s been done, but everybody still asks because he’s so special and talented,” Shaw informed Rich Eisen. “But he has moved on. He started grad school this fall. He just had baby number two. His life is great. He’s very content on his NFL career. He’s not fired up about how it ended, but it did end. He did a lot of great things and brought a lot of joy to the people of Indianapolis. Now it’s time for chapter two.”

Wait… was Shaw supposed to tell the world Andrew Luck was going to be back on campus in Palo Alto this fall?

“Yeah, I don’t know if I was supposed to publicize that or not,” Shaw replied when Eisen seemed surprised by this bit of news.

“He’s starting grad school this fall. He and his wife, Nicole, are coming back out this way and he’s going to be around. He loves the Stanford environment and he and his family are going to spend some time here. We can’t wait to be around him.”

Wait. Andrew Luck is doing WHAT this fall?!

Quite the update from @CoachDavidShaw on Luck, @houstontexans QB Davis Mills and the “monster chip” on @CMC_22 shoulder. pic.twitter.com/k4rdJxAYqZ

Andrew Luck really went back to being a regular dude. Love that for him https://t.co/yrDpBuGSiy

The zip-up cargo shorts should have been the first clue.

Naturally, given his still young age, several football fans are still hoping for a comeback.

Andrew Luck has been retired for 3 years and he still has more playoff wins since 1995 than the Dallas cowboys.