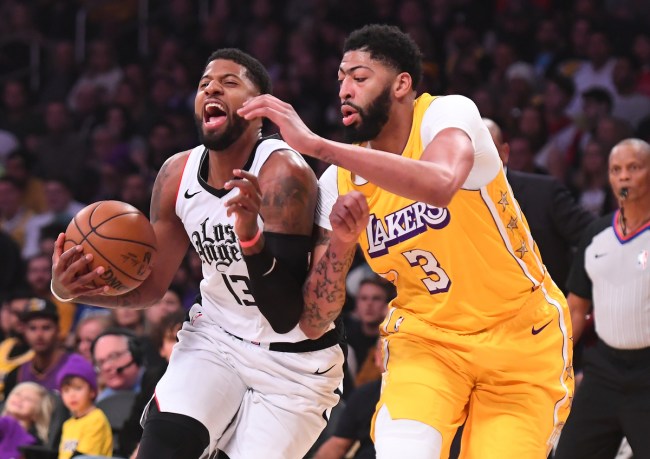 Remember when Anthony Davis was in a similar position as James Harden’s currently in? You know, when the seven-time All-Star was unhappy playing for a franchise that he didn’t actually want to play for (New Orleans Pelicans), and he was doing pretty much everything possible to force a trade? Yeah, it wasn’t that long ago (early 2019), but, given all that’s happened to Davis since — like winning a championship with the Los Angeles Lakers and re-signing to stay in LaLa Land this offseason — it might be easy to forget.

But just because AD ended up with the Lakers a couple years ago doesn’t mean there wasn’t a ton of interest from other teams. I mean, c’mon, who wouldn’t want to land a perennial MVP candidate and, arguably, one of the top-5 players in the league, right? Well, I’ll tell you who: The Indiana Pacers.

Back in June, former Pacers star Paul George discussed the real reason why he wanted to be traded by the franchise a couple of years ago, saying the team didn’t pursue the “best power forward at the time” — whom PG13 was recruiting. As it turns out, that player was Anthony Davis (surprise!), and, after Indiana’s front office refused to aggressively go after Davis, it led to a snowball effect around the entire league.

George ended up with the Oklahoma City Thunder, then got dealt to the Los Angeles Clippers to team up with Kawhi Leonard. The Lakers traded away a ton of young assets to acquire Davis, who joined forces with LeBron James to capture a championship in their first season together. But, man, what could’ve been… if only the Pacers actually pursued AD.

While it was pretty obvious that George was referring to Anthony Davis back in June, the Lakers star recently told his side of the story. Davis pretty much embarrasses the Pacers’ front office for just letting the idea evaporate, while hinting that James swooped in and started recruiting him to the Lakers soon thereafter.

“The Paul thing in Indiana, it was a conversation for sure,” Davis said. “It kind of just faded away. I’m not sure what happened on their end. He said that management didn’t want to do it whatever, but it was a conversation, and then LeBron [James] saying he wants to team up, then the year that we do we win a championship.

“LeBron kind of spoke it into existence, and it happened. Glad it happened for me for selfish reasons. I wanted to be a champion and able to do that my first year teaming up with him, but who knows what would’ve happened with Paul in Indiana.

“He’s another great player, especially when he was in Indiana he was definitely tough to guard. He’s still tough to guard today. But I think that was so long ago that we played each other many times since then. You always think about what could’ve happened. Would my career be a lot different than it is now?”

Anthony Davis on Paul George saying they talked about teaming up on the Pacers: "Paul thing and Indiana was a conversation for sure. It kind of just faded away. I'm not sure what happened on their end. He said that management didn't want to do it whatever…" pic.twitter.com/H66EZ7AG7E

Now, if you’re a Pacers fan, how pissed off are you after hearing this? Like, Paul George wanted Anthony Davis. Even a couple years later, Davis appears to be in the dark on what happened, and why discussions fizzled out. Instead of taking a good hard look at this, Indiana’s leadership just ghosted their then superstar and didn’t communicate why it wasn’t interested in a deal with the Pelicans? Absurd. Like, fire every single person in the front office kind of absurd.

In the end, Indiana got burned, not only losing out on Davis, but having George (presumably) storm into the front office and demand a trade. Man, it’s hard not wondering what could have been had the two All-Stars teamed up together on the Pacers.

Then again, even had discussions between the Pacers and Pelicans gotten serious, it’s hard to assume LeBron James would’ve just sit back and let a deal happen without getting involved. With James and Davis sharing an agent, Rich Paul, is there any doubt LeBron wouldn’t have gotten one last chance at a Hail Mary to sway Anthony Davis to join him at some point?

There are tons of “what if…?” moments in sports, and this is just another one of them. In the end, it worked out for the superstar players. But if you’re an Indiana Pacers fan, you’ve got to be fuming knowing a potential George-Davis duo slipped away without much of an attempt.