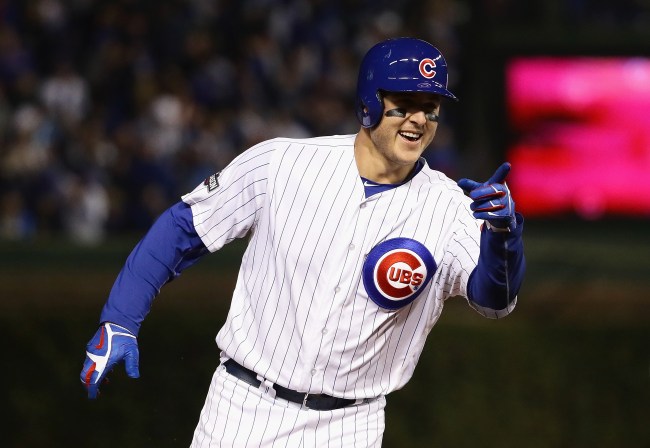 Add Anthony Rizzo of the Chicago Cubs among those MLB players who are pretty pissed off about that whole Houston Astros cheating scandal thing. While we’ve seen plenty of pitchers come out and admit that they plan on plunking some of the stars on the ‘stros — which has already happened a lot during spring training so far — Rizzo took things to a different level by roasting Houston for cheating during the 2017 World Series while mic’d up in a spring training game the other day.

As most of us know by now, Houston got busted for banging on trash cans to give notice to batters about what pitches were coming from the pitcher. That little act has already been mocked by a few people — including a Yankees fan during a recent Astros’ batting practice session — but Anthony Rizzo showed no mercy by mentioning the cheating during a live baseball game; albeit only spring training. Take a look below at Rizzo’s not-so-subtle zing of the Astros.

Rizzo after doing the math says he has no idea what's coming… "somebody bang for me" – later feels the fastball coming and hits it pic.twitter.com/nLHUWNZjyd

Who knew Anthony Rizzo was so funny, right? Not only did the Cubs first baseman sucker punch the Astros for how they cheated, but he also voiced his thoughts on what pitch was coming — a fastball — and actually guessed right, ripping it into right-center field. This is classic shit, guys.

Once social media saw Rizzo punking out the Astros, plenty of people offered up some reactions; which you can see below.

This type of coverage/access would be incredible. MLB tv ratings would jump up instantly. ACCESS = EYES @MLB @FOXSports @TBSNetwork @MLBNetwork

This is by far the most incredible thing I have seen. New favorite player @ARizzo44. Thank you

You must be fun at parties.

ESPN mic’ing up players isn’t a new thing, but Anthony Rizzo and his teammate Kris Bryant, who was also mic’d up, showed the type of A+ content that can be captured when players just have fun with the whole thing. If MLB is looking for a way to get fans more engaged and feel part of the game again, the league might want to explore adding more of this to the sport, because it’s fucking gold — and gives fans a sense of what players are thinking, saying and doing during games.