Antonio Brown’s Agent, Drew Rosenhaus, Doesn’t Even Know What’s Going On With His Client And The Raiders 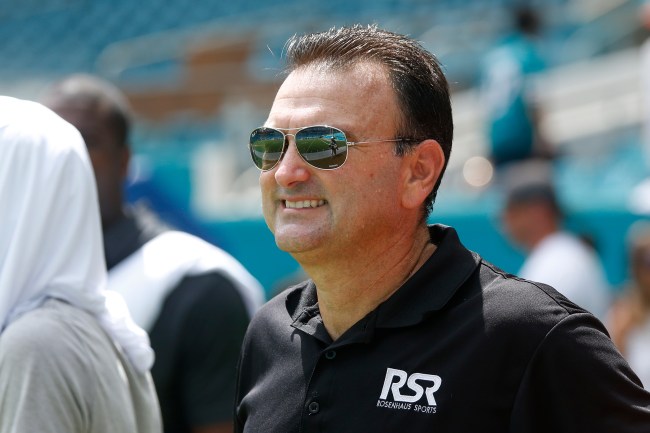 Antonio Brown is, without a doubt, the biggest prima donna athlete on the planet at this moment — and that’s really saying something. While there are other guys out there who demand attention and will do anything to get it, Brown’s at a whole new level, stretching out this months-long dysfunctional relationship with the Oakland Raiders into a level never before seen.

First, it was Antonio Brown blasting his former team, the Pittsburgh Steelers, even after being traded to the Raiders. Then it was some freak cryotherapy accident that led to extreme frostbite. Then it was threatening to retire over a discontinued helmet. Then it was taking shots at his front office for fining him for missing practices, which resulted in a reported heated scuffle today with GM Mike Mayock, leading to rumors that the Raiders had suspended Brown for Week 1 and, just maybe, could find themselves releasing the All-Pro. Yep, it’s been one helluva summer for these two sides.

One person in the middle of it all? Antonio Brown’s agent, Drew Rosenhaus, who, presumably, would know a little something about what might be going on with his client, right? Well, not so fast, because, while talking to Mike Florio before tonight’s first NFL game of the season, Rosenhaus didn’t seem too optimistic, nor educated, about what’s going with the malcontent Brown.

“I think there’s been a lot of speculation. The reality is that we’re still talking through many scenarios. There has yet to be a suspension. Nothing is final yet. I’ve been in touch with Coach Gruden, Mike Mayock. We’re doing our best to work this out. Trying to keep this relationship moving in a good direction again,” Rosenhaus said.

If you’re a Raiders fan, that can’t be too thrilling to hear. Having Rosenhaus “believe” his agent wants to be part of the franchise, but that he “can’t speak for him,” kind of seems as if Brown may have hinted something to the contrary. Then again, who knows with AB?

As for what to expect in the near future, Rosenhaus said that he wasn’t optimistic about Antonio Brown playing in Week 1, but, echoing the above statement from the agent, that he’s doing what he can to try and get his client on the field.

Rosenhaus said he just can’t say whether Brown will be in uniform Monday night against the Broncos. “I’m not optimistic that I can give you an answer to that right now,” Rosenhaus said. “If it were up to me, if it were up to Antonio, he would play. But there’s a lot of people involved who have to make that decision.”

What a damn mess. Even before the Raiders acquired Antonio Brown, people knew the guy was outspoken and high-maintenance, but nobody could’ve foreseen this type of shit going down. It’ll be interesting to see how it all plays out, because the Raiders have been pretty mum as of right now. Stay tuned.