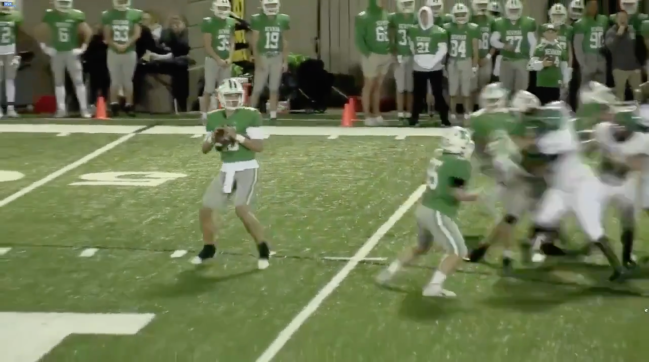 It didn’t take long for Arch Manning to get back to slinging the rock. After two consecutive losses, Isidore Newman dropped beat Cohen College Prep 34-0 on Friday and the nation’s top quarterback recruit was perfect.

Manning got things started right away. On the first play from scrimmage, the 6-foot-4, 215-pound junior dropped back in the pocket and found Saint Villere (which is one of the best names across all levels of football) over the middle for a 50-yard touchdown.

Newman got the ball back and on the next possession, Manning was at it again. After checking down on first down, his third throw of the game went 40 yards down the sideline for six.

The third touchdown of the game was a little bit less eventful. Newman drove into the redzone and Manning found his favorite target, Will Clarke, on a short snag route and a touchdown.

Newman went on to win the game with five first-half touchdowns and ran out the running clock in the second half. Manning did not play in the final 30 minutes but he did more than enough.

The son of Cooper, nephew of Peyton and Eli and grandson of Archie was perfect. He finished 9-of-9 for 153 yards and five touchdowns in the first half, and added two carries for three yards.

Here is what his head coach had to say:

Newman HC Nelson Stewart postgame reax to Greenies 34-0 win over Cohen as Newman gets back in the win column highlighted by:
-5 TD passes from Arch Manning to 4 different receivers
-Great O-Line play @BordelonBo moves to RG
-Shutout from defense pic.twitter.com/oFfe8eGmKK

Manning’s bounce-back performance came after two weeks where his team simply couldn’t overcome a significant talent gap. It was also an opportunity for him to show off in front of two major SEC programs.

Newman is home to the nations No 1 player Arch Manning pic.twitter.com/limqBmte70

Manning will turnaround and be on-campus at Clemson on Saturday for the Tigers’ game against Florida State.