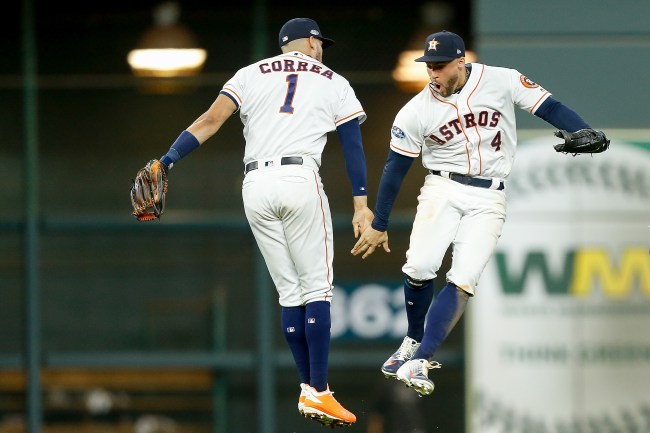 The Astros’ sign-stealing scandal is, arguably, the biggest display of cheating in MLB since the 1919 Black Sox scandal. That means that, in nearly 100 years of baseball being played, never had the sport seen a team do something so calculated in order to get a leg up on opponents, as Houston players were banging on trash cans in the dugout tunnel to alert batters of pitches that were coming.

While we’ve seen some of the fallout from the scandal — like Astros’ players being thrown at during spring training and fans cleverly roasting the team — considering the fact that the MLB regular season hasn’t even started, it’s safe to say this is just the beginning of some of the ribbing the players can expect. They can try to block it out all they want, but there are reminders pretty much anywhere they go about the sign-stealing scandal.

The latest example came in a brilliant display of trolling during a spring training game with the Atlanta Braves, which subtly blasted the Ace of Base song “The Sign” over the stadium speakers to get into the heads of Astros’ players. Take a look below at the video from Twitter.

This is some next level trolling by the Braves, so kudos to their in-game people for taking the risk and having some fun with it. Let’s face it, the Astros’ sign-stealing scandal rocked baseball, and it’s cost people jobs and has cast a huge shadow over the validity of the team’s 2017 World Series title, so it’s every team and/or player are right to blast the cheating ‘stros as much as possible when they can. This is just some good ol’ fashioned fun. No harm, no foul.

While the Braves did the Astros dirty here, I’m still waiting for the moment when a player uses that “Banging on a Trash Can” song from the old Nickelodeon cartoon Doug. Yeah, that’d be next level trolling if/when that happens.

Yeah, that’d really get the Internet riled up and laughing at the Astros even more over their cheating scandal. People won’t ever let those guys live it down.