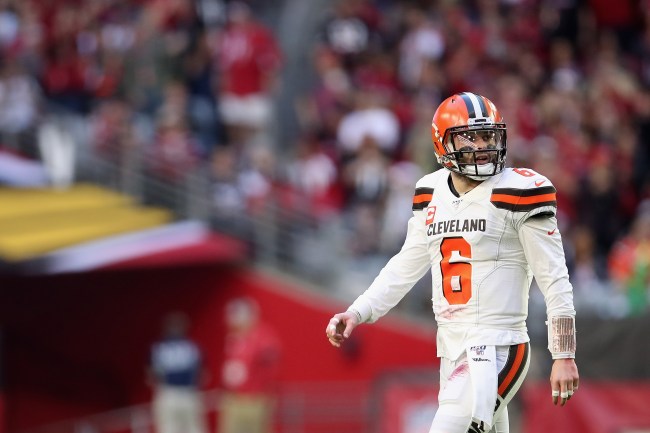 If Baker Mayfield needed more fuel for the (hopeful) 2020 NFL season, analysts at ESPN may be providing it for him. The former No. 1 overall pick — who set a rookie record his first year by passing for 27 touchdowns — has all eyes on him as he prepares for a critical third season, with the Cleveland Browns hoping the gunslinger can prove he’s the franchise quarterback they’ve long been after.

While the consensus early on was that Mayfield was sure to have a long career with the Browns, after struggling mightily in 2019 following absurd expectations for the team (which ended with a 6-10 record and the head coach and general manager departing), many at ESPN think it’s put up or shut up time for the former Heisman Trophy winner.

Earlier this week, ESPN’s Mike Tannenbaum discussed how Baker Mayfield may find himself on a quick leash and could be benched should he struggle early in the season, and writer Bill Barnwell went even further in a recent column, writing that this could be the quarterback’s final year in Cleveland if he mirrors his 2019 campaign — which saw him throw just 21 touchdowns to go along with a league-high 20 interceptions.

This is a critical year for Mayfield. It’s not out of the question that this could be his last season as the Browns’ starter if he continues to struggle. It seems crazy to imagine him going from toast of the town as a rookie to fighting for his job in Year 4, but the Bears went from thinking Mitchell Trubisky was a franchise quarterback after the 2018 season to turning down his fifth-year option a year later. The Browns will have to decide on Mayfield’s fifth-year option next spring, and if he disappoints for the second straight campaign, it’s not going to be an easy call.

The reality is, Baker Mayfield needs to prove to new head coach Kevin Stefanski and a new general manager that he’s their guy. Remember, the new regime doesn’t have any ties to the quarterback — as a different front office leader selected him first overall in 2018 — so the signal-caller is under the microscope to perform at a high level.

Echoing both Tannenbaum’s and Barnwell’s opinions is ESPN analyst Damien Woody, who talked about how Mayfield could find himself in a similar position as the Bears’ Mitch Trubisky, who went from Pro Bowler in 2018 to now competing with former Super Bowl MVP Nick Foles as the team’s starter in 2020. It’s been a hard fall for the former No. 3 overall pick, and Woody sees similarities in the situation with Mayfield and the Browns.

Although this all comes across as harsh, it’s the reality of the situation Baker Mayfield finds himself in with the Browns as he enter year three. And, while it may fell premature, the team did sign backup quarterback Case Keenum this offseason — a former starter who has a history of playing with new head coach Kevin Stefanski — so Mayfield could quickly fall from favor if he doesn’t play well next season.

As a lifelong Browns fan, here’s to hoping Baker steps it up, continues to change himself, doesn’t keep our string of rotating quarterbacks — or that daunting postseason drought — and he’s able to show he’s the face of the franchise everyone in the Dawg Pound wants him to be.