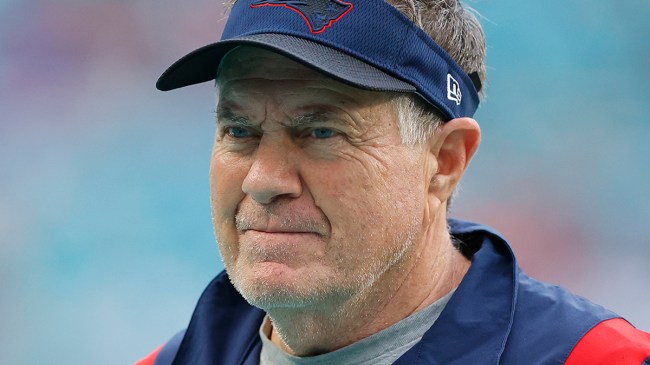 Based on everything we know about Bill Belichick, it would be infinitely easier to name all of the things the famously no-nonsense coach of the Patriots doesn’t have a distaste for as opposed to trying to put together a list of all of the things that he hates; there’s a 0% chance he’s ever used Facebook, but if he had an account, I assume his list of “likes” would look something like this:

As far as dislikes go, it’s hard to imagine there are many things the ornery skipper despises more than the press conferences he’s routinely shown he has absolutely no time or patience for.

Belichick was kind enough to tolerate a question that was lobbed his way by a kid reporter during an event earlier this summer, and he has shown he does have the ability to feel non-negative human emotions on the rare occasions where he’s cracked a smile.

However, it seems like Belichick usually steps up to the podium with exactly one thing in mind: doing everything in his power to make everyone else in the room as miserable as he is.

As a result, it’s hard not to love what unfolded when Belichick treated us to an uncharacteristic moment of joy when he gathered to address members of the media that had gathered at Gillette Stadium on Monday—a group that included the man, myth, and legend who is ESPN staple Chris Berman.

ABC6 had a camera trained on the coach when Berman walked by the podium and captured a visibly surprised Belichick exclaiming “Boomer!” before breaking out in applause (the longtime ESPN analyst joked “[I] haven’t been to one of these in a couple of years” after being called out).

The pure joy that comes over Bill Belichick when he sees Chris Berman.

It’s good to know Belichick reacts the same way the vast majority of people would after spotting Berman in the wild.