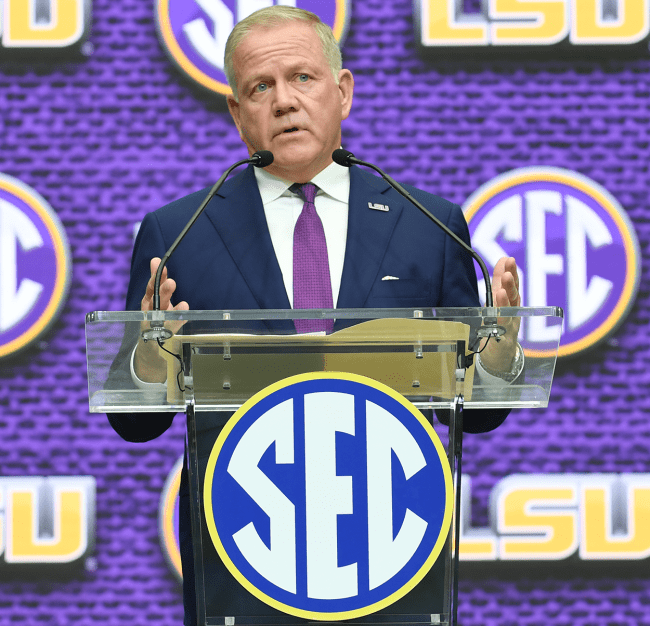 Brian Kelly’s first year as the head coach of LSU football has been full of a lot of scrutiny. And deservedly so.

After being hired away from Notre Dame in a shocking offseason move, Kelly has gone viral multiple times for dancing on TikTok, slipped into a fake southern accent during his first public appearance in Baton Rouge, made himself look like a hypocrite over NIL, got trolled by the SEC Network and may have exposed his burner account. Most recently, he got sassy with reporters after not getting the reception he wanted on Day 1 of fall camp.

Although Kelly’s time with the Tigers has been… unique… he is recruiting well and LSU should be better in 2022 than it was last season. It isn’t to say that Kelly is a bad coach.

He just doesn’t do himself any favors in terms of likability and day-to-day functionality. And his signature is the next topic of debate. It doesn’t really make any sense.

Here is an example of Kelly’s signature:

It raises a great question. The dot on the lowercase “i” is about as far to the right as it can go before it falls off of the first name entirely. It looks like he dotted the “n” in “Brian” and the B is not complete so his name reads more like Ryan with an accidental ink blot than it does his actual name.

why is the dot of the “i” all the way over there pic.twitter.com/M3ACf97c3G

In response to the very intuitive question about Kelly’s signature, there was plenty of jokes and theories, and they were all fantastic.

He actually just wrote Ryan* and needed to indicate the mistake

Getting ready for his next exit

Clearly it tried to move south but was off by a bit.

Maybe one day someone will ask Kelly the hard questions about his signature. I will volunteer as tribute should I be given the opportunity.