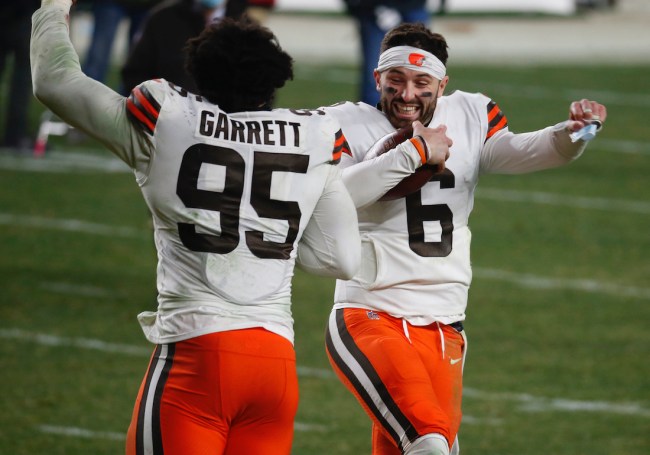 The Cleveland Browns have been one of the biggest disappointments in the NFL for the past two decades, annually underachieving and letting down fans (like myself) by frustratingly being completely incompetent. But that all changed during the 2020 NFL season when the Brownies overcame a pathetic Week 1 outing against the Ravens to win 11 games and reach the NFL Playoffs, signaling the tide may be turning.

With a team stacked with young talent such as quarterback Baker Mayfield, defender Myles Garrett, running back Nick Chubb and receivers Odell Beckham Jr. and Jarvis Landry, among others, the Browns are a trendy team to (potentially) compete for deep postseason runs. We saw the Patriots do that for 20 years. We’re witnessing the Chiefs shape its dynasty. And, yes, the Browns could be next. In fact, according to ESPN’s Mike Greenberg, Cleveland will be the biggest threat to Kansas City next NFL season in the AFC, as he proclaimed in Wednesday’s Get Up.

"I believe the Browns are the single biggest threat to Kansas City in the AFC going into this season, and that's inclusive of Buffalo and absolutely everybody else."

Obviously, as a Browns fan, this offseason hype is amazing to hear. Then again, fellow members of the Dawg Pound know to take the attention with a grain of salt, having lived through failed seasons in the past that resulted in lots of pain. Hopefully, those days are no more, and the Brownies really do shape into a formidable Super Bowl contender for the next decade-plus.

Should that happen, it’s going to come on the shoulders of Baker Mayfield, as the former No. 1 overall pick took giant leaps during last season under his first-year head coach Kevin Stefanski. Not only did the quarterback guide Cleveland to the NFL Playoffs for the first time since the 2002 campaign, but he played out of his mind down the stretch, rating only behind Patrick Mahomes and Aaron Rodgers in total QBR following an injury to Beckham Jr.

With small flashes of brilliance, Browns fans believe Mayfield’s their guy. So when a recent ESPN article suggested the team may be intrigued in trading for Rodgers given his ongoing dispute with the Packers, the Cleveland fateful let it be heard that they have zero interest in such a swap. Just look at what fans were saying on Twitter about the rumors.

Aaron Rodgers wasn't the one embracing Cleveland at their worst.

Aaron Rodgers wasn't the one who ended the 19 year QB search.

Aaron Rodgers wasn't the one who cried when the Browns broke an 18 year playoff drought because he understood what it meant.

Aaron Rodgers is amazing and a future Hall of Famer… but Baker Mayfield was put on earth to quarterback the Cleveland Browns!

I can’t believe I even need to say this, but here it is:

Baker Mayfield embraced us fully when he arrived in Cleveland at a time when NOBODY believed in the Browns. I’m not about to throw him over for Aaron Rodgers, or anybody, ever.

We ride or die with Baker. End of story.

I’d rather lose with Baker than win with Rodgers.

Yes, finally, Browns fans get it. Baker Mayfield is absolutely the right quarterback for the franchise, and, as he promised during the NFL Combine in 2018, is absolutely the leader the team needs to turn around the culture and move on from all the losing. The fact that he’s feeling that support after a couple years of criticism is only going to improve his confidence even more. Let’s kick-off the NFL season now, because the Brownies are coming, baby.

Look, there’s no denying Aaron Rodgers’ place in NFL history, with the reigning league MVP already being fit for a Hall of Fame blazer. But the current Green Bay Packers quarterback lacks the grit of Baker Mayfield, who fought like hell to overcome the doubt about him as the No. 1 overall pick to turn the Browns into a potential powerhouse. Give me Baker all day long.