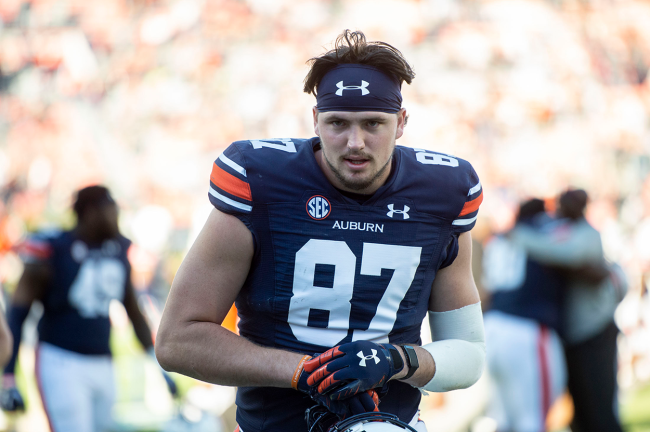 Bryan Harsin’s first year as the head football coach at Auburn University was not what he, or anyone surrounding the program, had hoped. The Tigers went 6-6 in the regular season and lost the Birmingham Bowl.

From there, chaos proceeded to unfold.

Auburn’s defensive coordinator took a significant pay cut to coach elsewhere and rumors started floating about Harsin and his personal life. All of them proved to be untrue, and the overwhelming belief is that they were spread by the boosters in an effort to get him fired.

Ultimately, the school opened up an extensive investigation into Harsin, his conduct, and how he runs the Auburn program. Harsin remained adamant that he did not do anything wrong throughout the entire process and the investigation found that to be the case. He was cleared of all allegations.

And it appears as though his players are buying in.

Auburn junior tight end Brandon Frazier made a bold statement during a recent conversation with Plains NIL Club. He said that Harsin is the coach who can get the Tigers to the promised land.

Obviously, this is what a player is going to say about his head coach. For Frazier to say anything else would be concerning. But that doesn’t mean it isn’t a bold statement after such a tumultuous 2021 and start to 2022.

Although national championship would be a tall task this year, Harsin and Auburn must improve on last year if he wants to stay off of the hot seat and keep his job. However, based on an anonymous coach’s scathing, negative outlook, the Tigers will not be very good this year. Harsin will try to prove the haters wrong and Frazier thinks he can do exactly that.