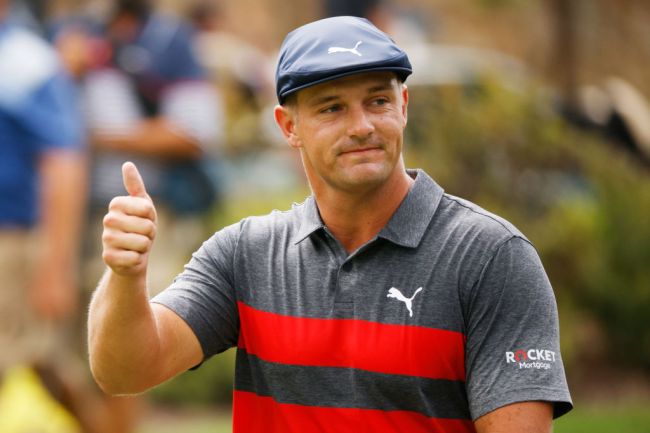 After months of drama involving Brooks Koepka and fan heckling reaching a boiling point, Bryson Dechambeau decided that now is the time to address things head-on in a sit-down interview with Golf Channel.

DeChambeau had been avoiding the majority of media obligations for weeks, but after reportedly snapping at a fan at last week’s BMW Championship and the PGA Tour threatening to kick out fans who call him ‘Brooksie,’ he essentially had no other choice but to formally address all that’s going on.

The 27-year-old is different, he knows that, and he also respects the fact that some people out there are always going to give him a hard time because of it.

“Look, I can take heat, I’ve taken heat my whole entire life and it’s because I’m a little different and I understand that,” DeChambeau explained. I appreciate that too. No matter what, if you’re a little different, whether you’re Jeff Bezos, Elon Musk, whoever it is, there’s always going to be heat. I recognize that and I respect that.”

While DeChambeau says he can take the heat, he has two main concerns with what all of the fan heckling going on may do to the game of golf: an impact on live betting and the future of the sport.

“It’s not just me, it’s what’s going to happen with live betting down the road. How can we make sure every player has a fair share to player their best and have an equal playing field?”

“It’s really about the future of the game, and where we want to take this game because I believe in this game so much and I care so much about this game.”

As for the ‘Brooksie’ chants specifically, and other chirps from fans, DeChambeau said those aren’t distractions, instead just “another variable” he has to account for.

When it comes to Koepka, which their rivalry started years ago but has grown tremendously over the past few months or so, DeChambeau explained he has no issues with him.

“I really don’t have an issue with him,” DeChambeau said. “The crowds are going to say what they are going to say because they have a right to do so. And it’s been going on for months now, everyone has their own tipping points. I’ve done a pretty good job of letting that fuel me in a positive way.”

He’s also more than willing to set everything aside for when the two become teammates for the Ryder Cup at the end of the month.

Will this sit-down actually change certain people’s outlook on DeChambeau? No, probably not, that ship has sailed. However, it’s about time he spoke up and at least tried to explain where he’s at mentally with everything that’s been going on over the course of the year. All in all, he said a lot of good things throughout the interview.