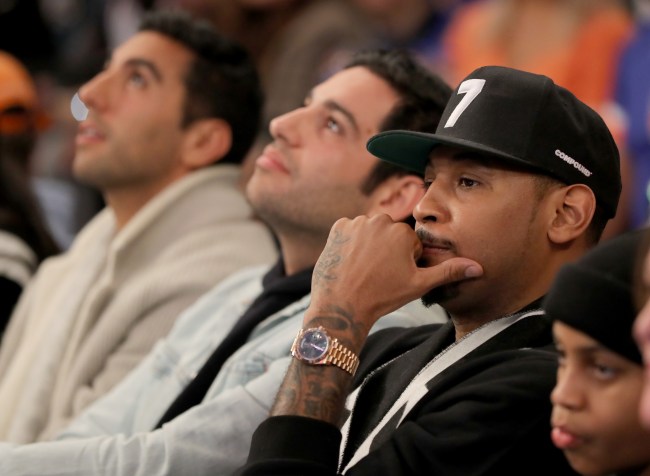 Carmelo Anthony continues to haunt the New York Knicks. Sure, the 10-time All-Star averaged 24.7 points for the team during his seven seasons playing in Madison Square Garden after forcing his way to the Big Apple from Denver in 2011, but, like so many others, Melo wasn’t able to elevate the team to greater heights. And, in a weird way, he could impact the franchise’s decision-making when it comes to trying to acquire Anthony Davis from the New Orleans Pelicans.

With the Knicks armed with the No. 3 overall pick in this month’s NBA Draft, many believe that the team could be shopping the pick, instead looking for a bona fide superstar like Davis to try and entice other stars to head to Manhattan via free agency. On paper, the plan sounds great, right? Get rid of some young assets and that valuable pick to get an All-Star. Well, it’s not such a great idea to some front office executives with the Knicks, who, reportedly, have referenced the 2011 trade that brought Carmelo Anthony to them.

The report comes from Ian Begley of SNY, who had this to say about the Knicks’ attempt to put together the right trade package for Davis, and the reluctance from some within the franchise to do so.

The Knicks had engaged in some dialogue with teams in an effort to improve their offer for Davis, per SNY sources. It’s unclear how far along — if at all — any of that dialogue was, but some people in the organization were uncomfortable with the idea of trading away significant assets for Davis, citing the way things played out for New York in the wake of the Carmelo Anthony trade, per SNY sources.

Similar to Anthony Davis, when the Knicks traded for Carmelo Anthony eight years ago, he, too, was entering the final year of his contract, ultimately staying in New York, but, as mentioned, never taking the franchise to the heights many thought he would. More importantly, Melo never got another superstar to play alongside him.

The 2011 trade for Anthony was a massive, 12-player swap that included three teams, with the Knicks giving up a ton to acquire Carmelo. As talented as Anthony Davis is, it doesn’t sound as if some within the Knicks’ organization are absolutely convinced he’ll a) stick around beyond this season when he becomes a free agent next summer, and b) would be worth getting burned again by trading the entire farm for.

The NBA offseason isn’t even here yet, but it’s already wild if Carmelo Anthony is impacting what teams are thinking about doing.