Carson Wentz Is Tradable ‘Cause Some NFL Team Will Let Its Ego Get In The Way Of Common Sense, Per Report 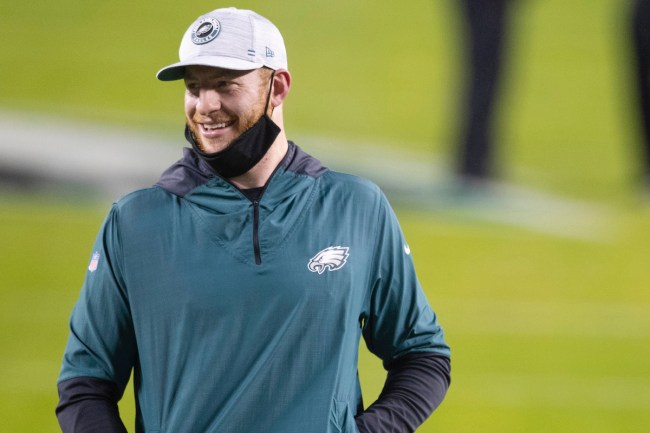 After struggling and being benched in favor or a rookie, Carson Wentz’s time with the Philadelphia Eagles appears to have come to an end. Sure, there’s a new head coach coming to town who might think the former No. 2 overall pick can still be the franchise quarterback, but with an inflated contract that doesn’t match his limited production of the past couple of years, one would assume Philly’s bound to move on.

Of course, the Eagles can’t exactly cut their losses here or just give away Wentz for some draft assets because of that contract. Like, in the history of bad deals, Philly’s might take the cake. We live in a world where Carson Wentz is due $128 million over the next four seasons, meaning he’s the ultimate handcuff for the entire franchise.

But NFL Insider Ian Rapoport actually sees a situation this NFL offseason that defies the odds and lands Wentz on another team. It might seem… unthinkable, but, according to the longtime reporter, he believes the Philly signal-caller is “tradable”, despite that awful contract and his terrible performances of the past couple years.

So what makes Rapoport so confident about all of this? Ego. Straight up, he thinks that another head coach will look at Carson Wentz and think they can fix him. Look no further than Bill Belichick in New England this past season, who tried to do the same with former MVP Cam Newton — which was a disaster, and led to both sides parting ways this NFL offseason. Jsut look at what the NFL Insider had to say about the situation on the 94WIP Morning Show.

“Carson Wentz is very tradable,” Rapoport said on the 94WIP Morning Show. “Whether they want to or whether they want to fix him and try to make good on their investment, that’s a different story. Someone is going to look at Carson Wentz and say, up until the first half of the Washington game, this was a good quarterback. Something happened and it was all bad and he played terrible. But before then, basically up until half time, everything was fine and someone is going to say, ‘I can recapture that.’”

If you’re an Eagles fan, this is probably music to your ears. Sure, Carson Wentz showed flashes of being an MVP-caliber quarterback as recent as a couple years ago, but, since then, he’s been running around for his life, looking like a chicken with his head cut-off. He’s been inaccurate and, well, very backup-like. So to imagine Philly finding a trade partner would be very good news — especially if Jalen Hurts elevates his game next season, assuming he’s the starter.

Despite Wentz’s atrocious contract, bad play and his reportedly poor leadership with teammates, Ian Rapoport is right about this, because ego will absolutely get in the way of common sense for at least one team this NFL offseason. You just know a head coach and/or front office somewhere still sees him as the quarterback who was the second overall pick, not the one pouting on the sidelines after being benched.