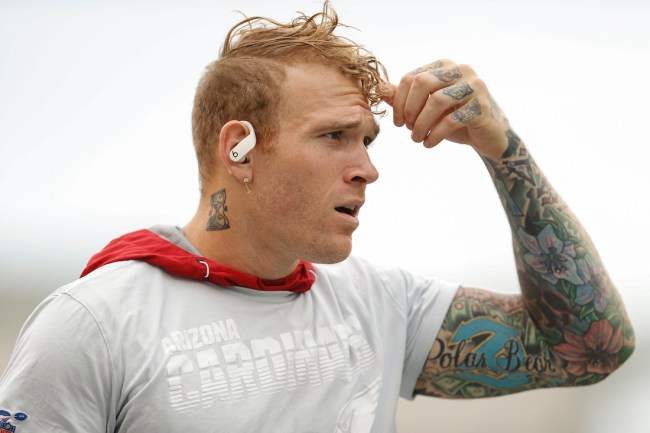 Many people probably only know Cassius Marsh as a situational defensive end, with the seven-year NFL veteran having bounced around the league since being drafted in 2014. With stops on teams like the Seattle Seahawks, Oakland Raiders, Arizona Cardinals, etc., there’s one organization that he doesn’t think creates much of a welcoming atmosphere for its players: The New England Patriots.

A member of the Pats during the 2017 NFL season, Marsh reportedly had a locker room tirade over playing time, ultimately leading to his release mid-season. And while the defender recognizes that the “Patriot Way” is a mentality instilled by head coach Bill Belichick, that doesn’t mean it’s the right way.

Appearing on Tom Segura’s 2 Bears, 1 Cave podcast, the 29-year-old Cassius Marsh laid into Belichick’s unwelcoming approach, saying the legendary coach is boring AF, and that the Pats treat players like complete crap. Marsh added that guys only put up with it for the chance to compete for Super Bowl and because, should a player win a ring, it often leads to a bigger paycheck with another team.

“The Patriot Way is pretty, it’s extremely impressive. Like, they work day in and day out, their work ethic over there, what they instill is pretty legendary. But they also treat players like crap,” Marsh stated.

Marsh’s first thought to explain this assertion: no lunchtime for players.

“They don’t, you don’t have like — you don’t have a lunch, period,” Marsh said. “You get there and you have to make time to eat in between meetings. And they’re like 5-10 minute periods where I would literally go scoop food and put in in a cup and like just crush it real quick before I got to the next meeting. It’s just like there’s no … no B.S. There’s no fun.”

Obviously, that’s some harsh criticism from Cassius Marsh, who claims that his time with other coaches like Pete Carroll in Seattle have been much more fun and engaging. The defender likened other team atmospheres to a college experience, unlike the buttoned-up style of Bill Belichick’s “Patriot Way.”

While Marsh’s comments might be surprising, he told Segura that other former Patriots players have actually thanked him over the years for being so candid about the culture in New England.

“Here’s the thing. Like, over there, nobody says anything publicly, because they’ve won so many championships. So you don’t want to upset the fan base, because after you win a Super Bowl, you can get paid for signings in New England for the rest of your life, because you’re a Super Bowl champ,” Marsh said. “So it was funny like when I did that article, a lot of the players like thanked me for like making it public on how bad they treat guys.”

As for what it’s like to sit in one of Belichick’s daily meetings, well, Marsh made it sound as if it’s as thrilling as being at a doctor’s office. Just take a look below at what the defensive end had to say.

“Dude, OK. So [laughing]. Yo, so, imagine like, oh man … imagine you’re working like a 9 to 5, and like, everybody’s at like a team meeting, right? And it’s almost in like a school assembly, OK? And the dude who walks in is like the CEO and he’s like an old dude who you know just plays no games. So like when he walks in, it’s dead quiet. Like … everything stops. All phones get put away. All laughter, any type of little chit-chat, done. K?

Sure, the “Patriot Way” may have led to plenty of Super Bowl appearances and wins, but at what cost? Some players can deal with it, some can’t. Obviously, Cassius Marsh falls in the latter category, and prefers a lighter environment when looking for a team.

Despite the near-militant approach set by Belichick, as Marsh points out, players will continue to deal with the way things are run for the chance to a) win and b) potentially cash out following an NFL season. Others, like Cam Newton, seem to actually enjoy playing for the organization. So, who knows, guess it’s just the whole “to each is own” mentality.