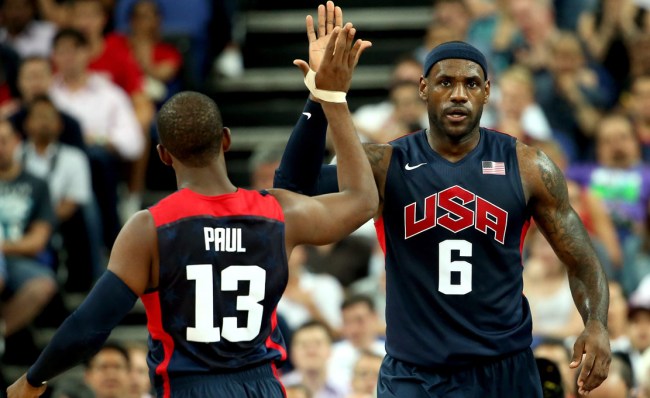 Here’s some news that is huge if it pans out. Chris Paul, one of LeBron James’ close friends and banana boat buddy, is reportedly telling people James wants to play in Los Angeles next year.

According to ESPN’s Stephen A. Smith on his radio show Monday, “Chris Paul is telling folks LeBron ain’t trying to come to Houston, he wants to be in L.A.”

But which team in Los Angeles does LeBron want to play for? Smith didn’t specify Lakers or Clippers. (The Lakers are currently the heavy favorites.)

He did also mention the fact that, as previously reported, James is not a fan of the city of Houston.

“I heard this from his own lips when we were in Houston this season,” the Akron Beacon Journal’s Marla Ridenour told ESPN Radio. “He does not like Houston as a city. So, that would require him moving to a place that he’s not crazy about.”

Smith also stated that, despite rumors, people in Los Angeles aren’t sure Paul George is going to come there, and George may stay in Oklahoma City thanks to his solid relationship with Russell Westbrook. (He can also make more money staying there.)

He also said he heard that LeBron going to Los Angeles is not dependent on Paul George also going there.

In fact, over the weekend, a Reddit user claimed he had evidence that LeBron James Jr. was enrolled at Sierra Canyon High School in Los Angeles for the fall semester. Which, if James is planning on going to Los Angeles makes sense because Kenyon Martin and Scottie Pippen’s sons, as well as top-ranked recruit Cassius Stanley are on the basketball team there. Sierra Canyon denied the rumor, however.

Just talked to a Sierra Canyon official on the rumor that Bronny James has committed: "That's news to us. He hasn't."

Then again, what else are they going to say at this point?

All of this doesn’t mean that Paul is going to give up on trying to recruit his buddy LeBron to the Rockets.

More from @wojespn on Chris Paul, from the ESPN2 NBA Draft preview:

"Chris is going to return there. Right now, his focus isn't so much on his own free agency, he's trying to recruit LeBron James to Houston." #Rocketshttps://t.co/g96qHzr3eU

James has until June 29th to notify the Cleveland Cavaliers whether or not he intends to opt out of his contract. Until then, and probably longer, we are just left to speculate.

Will he go to the Lakers, Warriors, Sixers, Heat, Spurs, Blazers, Clippers, and Rockets? Or just stay with the Cavaliers? The Decision 3.0 is coming.