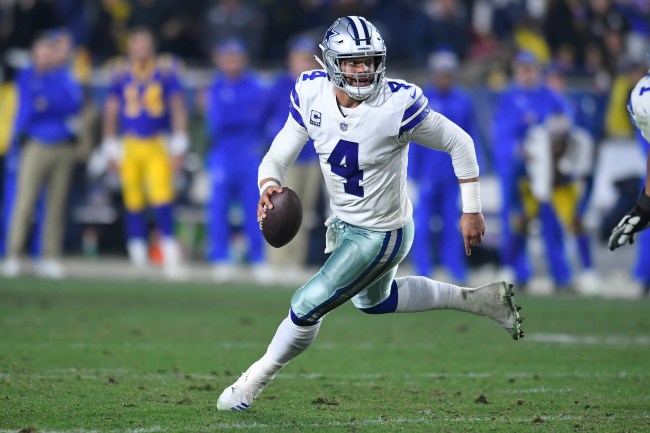 Dak Prescott sure has risen up the ranks in the NFL, hasn’t he? After being selected as the No. 135th overall pick in the 2016 NFL Draft, the current Dallas Cowboys quarterback has proven that he’s got the chops to be a solid starter in the league. Here’s the main question, though: Is Prescott really a franchise signal-caller, or just an above-average player?

That’s the question the Cowboys are wrestling with right now, because Dak Prescott’s in line for a new contract and, apparently, the former 4th-round pick is asking for the damn moon. That’s because, according to the Fort-Worth Star Telegram, the quarterback’s agent has “broached a deal” in the range of $34 million per year. To put that into perspective, that’s on par with the $34 million annual salary that two-time Super Bowl champion and future Hall of Famer Ben Roethlisberger earns from the Pittsburgh Steelers.

Per the Fort-Worth Star Telegram:

While that deal could impact his negotiations with the Cowboys, as the team is analyzing all 60 pages of Wentz’s new contract, per source, know that Todd France and CAA have broached a deal in the range of $34 million annually, according to someone with knowledge of the talks.

The Cowboys have made it clear they view him as their franchise quarterback and want to secure his future before the start of the season.

“It happens when it happens,” Prescott said. “I’ve got my cowboy hat on, so I’m a Cowboy. Let’s say that.”

Of course, the numbers being thrown around seems like fake money at this point following the extreme contract that Carson Wentz of the Philadelphia Eagles recently got, which made him the highest-paid quarterback in the NFL. Wentz’s deal came a month after Russell Wilson got, at the time, the biggest payday for a signal-caller, proving that playing quarterback is the best position in sports — so, for all you dads with sons, you might want to groom him like a Manning would.

Who knows if Dak Prescott ends up getting his reported annual demand, but with the Cowboys, seemingly, enamored with him and the steps he’s made to take the team to the playoffs last season, Prescott’s going to get life-changing money. Remember, he’s slated to earn “only” $2.025 million this year since he’s still on his rookie deal, but a bigger payday is coming soon.

Regardless of what happens, the fact that Wentz — who has never won a playoff game — got that monster deal has set the market, giving way to a guy like Dak Prescott to take advantage in his negotiations. Could you imagine if Tom Brady ever wanted to be the highest-paid player in the league and valued money over winning? Dude would be worth an ungodly amount given the six titles he’s won the Pats.