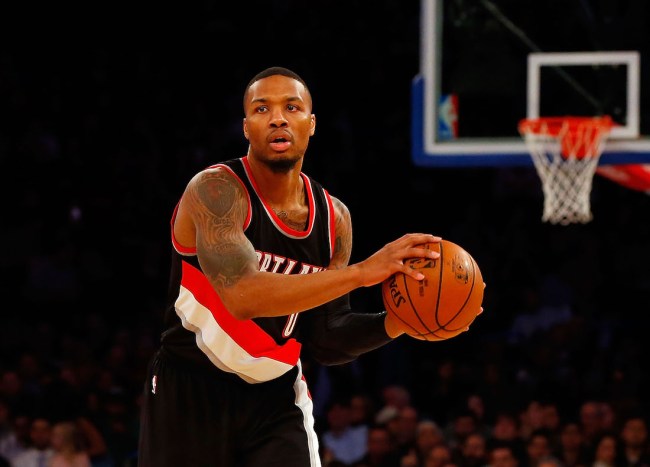 After his team’s exit from the NBA Playoffs and major changes to the coaching staff, the Damian Lillard trade rumors have really begun to fly over the past month or so. It’s one of those gut-check moments for the Portland Trail Blazers as the team enters this NBA offseason, as the franchise has critical decisions to make: Stay the course with the current roster, or mix things up.

While many in the Pacific Northwest want nothing more than keeping the core group of Lillard, CJ McCollum and others together for a few more seasons, there’s tons of speculation that the Blazers could entertain a Lillard trade. Why? While the franchise hasn’t full committed to a rebuild, hiring a first-time head coach, Chauncey Billups, isn’t necessarily a sign that next season is championship or bust.

But would the Blazers really be serious about dealing Damian Lillard, or is this just the case of media speculation? Well, according to one recent report, these trade discussions are very real. In fact, per Sports Illustrated‘s Grant Afseth, the superstar guard actually has his eyes on the New York Knicks as his top destination should he be moved.

Trail Blazers superstar Damian Lillard has his eyes on the New York Knicks among trade destinations in the event he were to be dealt, per a source.

Why Is Damian Lillard Reportedly Most Interested In Joining The Knicks?

After finishing this season with a surprising 41-31 record during head coach Tom Thibodeau’s first year with the franchise, the Knicks appear to be one of those teams on the brink of building a sustainable, winning culture. They have young pieces like Julius Randle and RJ Barrett to build around, among others, and, in a weak Eastern Conference, could find themselves as a top-4 seed with the roster they currently have constructed.

Thibodeau’s a respected head coach who has had success in the past, and makes a living preaching defense. He’s a major part of the reason why the Knicks may not be looked at as a joke anymore in the minds of many players.

But Damian Lillard To The Knicks Seems… Surprising

Among all the Damian Lillard trade rumors, hearing he prefers the Knicks is… surprising. Remember, this is a franchise that just reached the NBA Playoffs for the first time since the 2012-13 season, and, despite playing in the postseason this year, still lost in the 1st round.

Sure, Randle and Barrett appear to be young stars, but don’t think for a second that the Portland Trail Blazers won’t ask the Knicks about both of their availability in any trade for Lillard. Randle’s probably unavailable, but Barrett could be the centerpiece of any blockbuster deal for the superstar guard. That would only shake up the Knicks’ roster heading into next year’s NBA season, and would pose a question: Do Randle-Lillard-Reggie Bullock and some complementary pieces really strike fear in the Eastern Conference? Uh, no.

I’m all for surprises and for parity in the league, but give me Lillard on a team like the Golden State Warriors or L.A. Lakers where he’d actually have a chance at a title. Sure, he would make either roster absolutely stacked, but why waste his prime in New York hoping to get another star to play alongside him? He’s better off in Portland than in New York.

Some crazy things are happening around the world right now. We’ve got wildfires. We’re still living in a pandemic. We’ve got all sorts of other insane news going on. But if Damian Lillard truly prefers a trade to the New York Knicks over any other team, it might be proof that the end of the universe is upon us — because no NBA superstar in the past 10 years has actually listed the Knicks atop his list of top destinations.