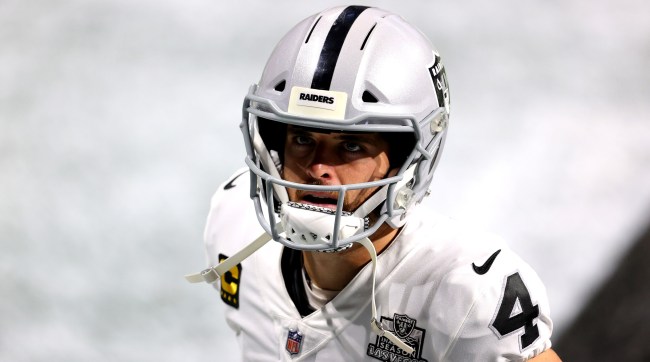 Well this is certainly a new one. Former NFL quarterback turned football analyst David Carr said, out loud, in public, that the Las Vegas Raiders should trade for Russell Wilson.

The problem with that statement? His younger brother Derek Carr is the current starting quarterback for the Raiders.

Wilson, who is strongly rumored to be seeking a way out of Seattle, has reportedly given the Seahawks a list of potential trade destinations.

While there are many teams in the market for a new starting quarterback, including the Bears, Washington FT, Jaguars, and Patriots, one team that has not come up in the Russell Wilson rumor mill has not been the Raiders.

In an article for NFL.com, David Carr analyzes the top 10 quarterbacks on the market.

NFL Network Insider Ian Rapoport reported Thursday that 10-plus teams have reached out to the Seahawks to inquire about Wilson. All this said, no one within the organization has suggested they would trade him, and Wilson hasn’t officially demanded a trade. Wilson wants to stay in Seattle, per his agent, though his agent also said if a trade were considered, Wilson would only consider going to Chicago, Dallas, Las Vegas or New Orleans. Thanks to the no-trade clause in his contract, Wilson, like Watson, would have to approve of the suitor.

If I’m one of those four teams, I’m picking up the phone yesterday. He is everything you want in a quarterback, with endless talent, arm strength, poise and intelligence. Plus, he has the kind of ice in his veins that gives his team a chance to win late in games, no matter how great the deficit. He’ll cost a GREAT deal, but the on-field production and leadership you’d get in return would be worth it.

It is certainly interesting, and more than a little suspicious, that David Carr thinks Las Vegas should have picked up the phone “yesterday” to make this trade. Does he not have faith that his brother Derek can get it done there? Or, and this may be more likely, does David have some inside information that his brother Derek would rather be playing for the Seahawks next season than in the silver and black who have been to the playoffs just once since 2002 – the last time the franchise won a playoff game?

Definitely some food for thought as NFL silly season rolls on.