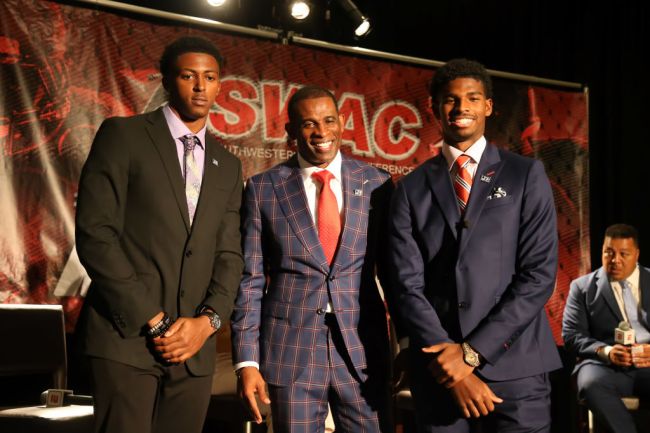 When Jackson State University hired Deion Sanders as its head coach in 2020, it sent shockwaves throughout college football. Not only did it set a new standard for schools hiring big-name coaches, but it happened at a small school in Mississippi.

The ‘Coach Prime’ era got off to a crazy start and the Tigers rattled off three quality wins to open the 2020 season. Sanders and his team put the Southwestern Athletic Conference on notice before losing three of its last four games and finishing 4-3.

Since then, the school has made a ton of money, Terrell Owens showed up at Jackson State’s recruiting camp and Sanders threw a temper tantrum. Somewhere during the wild beginning to the NFL Hall of Famer’s coaching career, his son Shedeur Sanders committed to come play for his father in the Dirty ‘Sip.

Shedeur was a four-star quarterback recruit in the class of 2021 and the No. 24 overall recruit at his position. It was a big get for the Tigers (even though his dad is the coach) and Shedeur became one of only five four-star recruits in program history. The other four also came under the Sanders staff in the 2021 class.

As a senior, Shedeur led Trinity Christian high school in Texas to the 2020 TCAL National Championship and held offers from over 25 Power-Five programs. He recorded 12,498 passing yards and 166 passing touchdowns throughout his career.

Just like his dad, Shedeur Sanders has a lot to say.

The 6-foot-2 freshman is expected to start in 2021. As such, he was in attendance at SWAC media days.

Much like his big-talking, loud-mouthing father, Shedeur had a lot to say.

QB1 at @GoJSUTigersFB @ShedeurSanders wants to know how the team feels about being compared to other SWAC teams. pic.twitter.com/GmZncaXbeN

When he was asked how the Tigers offense performs against the defense in practice, Shedeur said that he thinks quality play in practice will translate to wins on game day. He even called a few blowout wins.

“It equates to a blowout,” Shedeur said. “You’ve got to understand we not … y’all don’t really understand, like, it’s players that have different caliber of talent that all came to JSU.

Taking it one step further, Shedeur explained the difference between Jackson State players and other SWAC teams. He did not hold back and fired some serious shots.

Now, Shedeur’s sentiments are not necessarily untrue. By hiring his father, Jackson State became relevant to top athletes across the nation, as opposed to other SWAC programs that cannot recruit nationally. The other SWAC programs compete against one another for talent, while JSU is able to lure away talent from schools like Auburn.

Nevertheless, the way that Shedeur shared his thoughts was blatantly and intentionally disrespectful. He, just like his father, talks a big talk. It will be very fun to see whether he and the Tigers can walk the walk.