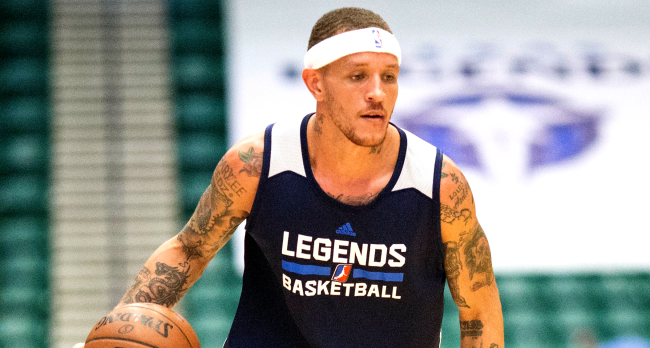 Former NBA player Delonte West has been very publicly struggling with mental health and addiction issues for the past several years.

His troubles first came to light back in 2016 when he was spotted wandering around a Houston Jack In The Box, wearing no shoes and a hospital gown over his flannel shirt.

He was later seen acting erratically and dancing outside a strip mall, begging for money, and being assaulted in the street.

West, who earned around $16 million dollars over eight NBA seasons, was eventually found to be homeless.

Numerous people like Dez Bryant, LeBron James, Doc Rivers, and Mark Cuban have tried time and again to get West the help he needs.

In new footage that has gone viral on the internet, the 38-year-old is once again looking healthy, knocking down some shots at Pat The Roc Basketball Academy in Maryland.

Delonte West back on a basketball court 🙏

TMZ reports that West has been training every day for the past month at the gym with the goal of playing in the BIG3 League.

Of course, fans have seen this sort of thing before from Delonte West. In 2020, West was also back shooting in the gym and looking healthy, only to relapse and find himself in jail.

After landing a job at the treatment center where he recovered after Mark Cuban helped get him into rehab, West was arrested in Florida after he was seen yelling and banging on the glass doors of a police station while holding bottles of alcohol.

Still, this is certainly a positive step for the former first round pick of the Boston Celtics. One that Delonte West can certainly build on and one that many basketball fans hope gets him back on the right path.

You gotta love that. Good for DW for being strong enough to keep on keeping on. And good for MC to have helped him find his way. Life is hard for a lot of people, including myself, but for some its nearly impossible to stay alive. Much love and appreciation to you Delonte.

Praying for him, whether he returns to the court or not, just for his mental health and healing. Whatever that looks like for him. What he's showing here is muscle memory from years of putting in work...

My can still got it. Put him in the big 3 and also let him have some platform in the nba to deal with people that suffer from depression/ mental struggles

It’s great to see him looking healthy again. I was at a wedding once that Delonte attended. Didn’t speak to him personally, but he was obviously a friend of my cousin. It was sad to see him fall from Grace, so just happy he’s got his life back together 🙏🏼