QB Delvin ‘Duck’ Hodges Is Having Nothing To Do With The Baker Mayfield, Steelers Talks 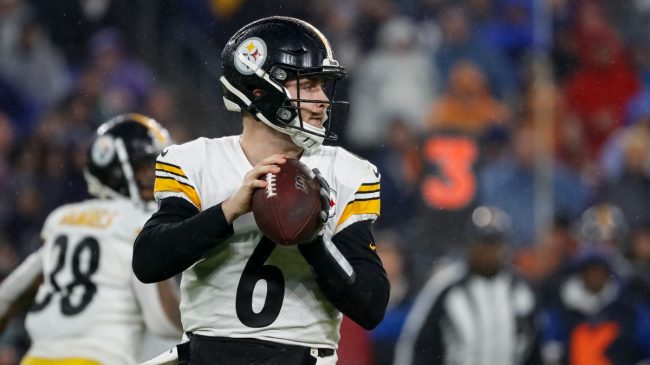 The Pro Bowl passer is likely on his way out of Cleveland after what’s been a tumultuous offseason.

The Browns have made it clear that they don’t want to Mayfield. And talks between the two have all but stalled.

It’s also obvious that Mayfield doesn’t want to be in Cleveland.

Unfortunately, his value on the market seems to be slipping. Mayfield requested to be traded to Indianapolis, but the Colts spurned those offers and instead chose to sign Matt Ryan.

With the market beginning to dry up, only a few teams remain as potential landing spots for the former first-round selection.

Seattle seems like an easy choice. But the Seahawks could also stick with Drew Lock and opt to take their chances in the NFL draft.

Another name that keeps arising is Pittsburgh. Despite the Steelers having signed Mitchell Trubisky this offseason, many think the Steelers could still make a play at signing their division rival signal caller.

One former Steeler is shutting that down pretty quickly, though.

Duck Hodges Wants Nothing To Do With Baker Mayfield In Pittsburgh

Delvin “Duck” Hodges played in Pittsburgh for one season. He started six games for the Steelers in 2019 despite entering the year as the third string option.

In those six matchups, Hodges posted a 3-3 record, with one of those wins coming over the Browns.

There’s apparently not much love lost between Hodges and his former rival. He made that known on social media this week.

The post came paired with a photoshopped image of Mayfield in a Pittsburgh uniform, donning Hodges’s old No. 6 jersey.

Hodges didn’t take kindly, and quickly responded with a post of his own.

Many Steelers fans had that same “Ewww” feeling when looking at the picture of Mayfield. They, too, began chiming in on the photoshopped image.

SOOOO much better!! I really miss you Devlin pic.twitter.com/Xha5My7Vmw

Takin Hodges over Baker every day of the week, twice on Sunday, and on any type of duck hunt. 🤙🏻

Biggest W of the day

Yeah that’s better no baker in a steeler jersey ever

Much much better! Miss you Duck! 💛

Hodges is currently playing his pro ball in Canada after being cut by the Rams in 2020. It looks like most Steelers fans would rather have him back in the black and gold than turn to Baker Mayfield.