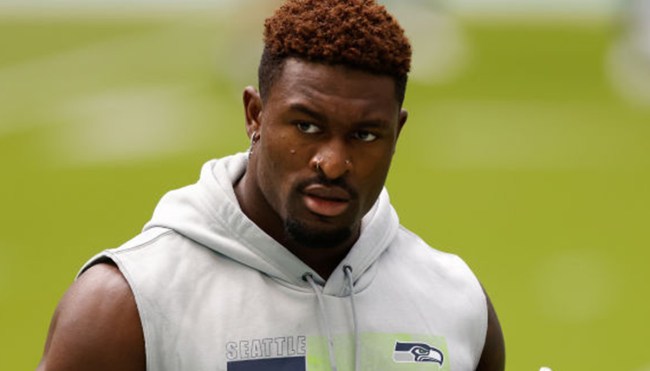 It’s been a little over three years since the world was treated to a truly jaw-dropping picture of DK Metcalf standing next to some fellow prospects ahead of the NFL Draft where he’d ultimately be selected by the Seattle Seahawks in the second round.

Metcalf’s softball skills may leave a bit to be desired, but the 6’4″, 235 lb. wide receiver has still managed to stun fans with the raw athleticism and insane speed that has spawned a number of impressive plays—including one of the most mind-blowing highlights NFL fans have been treated to in recent memory.

DK Metcalf's speed s unreal, how does he catch up???? pic.twitter.com/XKlKXGmJG7

Metcalf obviously puts in a ton of work in the gym to maintain his unreal physique, and while he’s previously stressed the importance of a balanced diet, it would appear he’s been straying away from that regimen based on what he had to say during a chat with Kevin Garnett.

Metcalf sat down with the NBA legend on a recent episode of KG Certified and was asked to “talk about how important nutrition is.” However, he quickly admitted he may not be the best person to chime in on that particular topic, as he revealed his typical eating regimen somehow involves a single meal over the course of a day supplemented by a coffee and a few bags of gummy candy.

DK Metcalf has an ABSURD diet 🤯

The admission understandably left Garnett speechless, as it’s hard to believe that Metcalf is able to look like (and perform how) he does while subsisting on a rotation of foods no reputable dietician would endorse.

With that said, it seems like it’s working out pretty well for him.