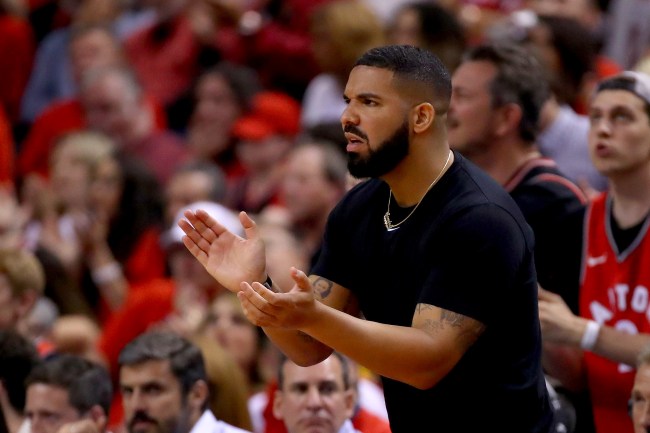 No matter your allegiance, I think all NBA fans can agree that Kevin Durant rupturing his achilles and likely being out all of next season is bad for the game.

The unfortunate injury brought Warriors’ GM Bob Myers to tears, prompted Canadians to not only send flowers to the Warriors to apologize for fans cheering his injury, but also to start a GoFundMe campaign for the Kevin Durant Charity Foundation to bury the hatchet.

We need silver linings in shitty circumstances as a coping mechanism. We need to laugh so we don’t cry. And thankfully, a video of Drake emphatically consoling the man he trolled earlier in the series for his extended absence has done just that.

Drake was captured theatrically looking distraught after Durant hobbled to the locker room. It was the kind of distraught that knew it would be seen, so it came off a bit contrived. Like the way you’d act in front of your wife if a barbecue at the in-laws got rained out.

Drake got emotional as he watched Kevin Durant leave the court with an Achilles injury. #NBAFinals pic.twitter.com/6DvWkvYy6p

Drake’s reaction proved to be an ideal meme template for NBA Twitter. Here are some of the greatest.

When your niece is explaining something tragic that happened to one of her dolls pic.twitter.com/MCbTCw931l

When your mom hands you the phone to talk to a relative. pic.twitter.com/DTdViDlMR2

Me acting fake mad plans got cancelled even tho I wasn’t pulling up anyways. pic.twitter.com/jjcC1HhdbK

Me coming to work late, acting like im mad at the trains when I actually sat at the edge of my bed until all my time was up pic.twitter.com/sExGgu2Moo

when ur most swagless homie cops the jawn u been eyeing pic.twitter.com/ILdjFcjKUF

In the dark times, leave it to the internet to find the light.