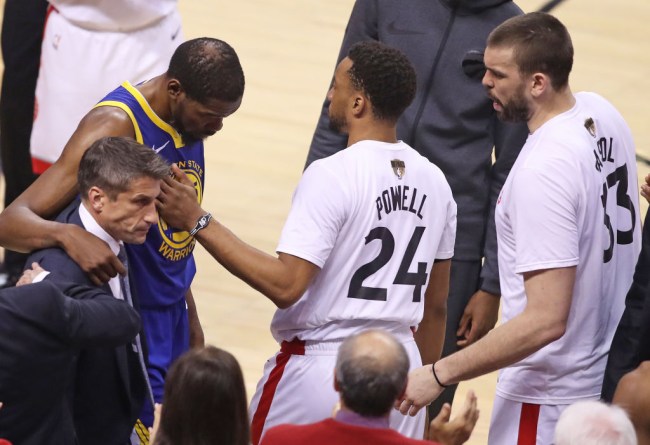 I’ll admit it’s unfair to generalize an entire fanbase based on the behavior of a few people but I’m having a hard time not judging Raptors supporters based on the incredibly questionable behavior they’ve exhibited during this year’s NBA Finals.

As Drake has proved on multiple occasions, there’s nothing wrong with a little bit of trolling but far too many people in attendance in Toronto took things to an undefendable level when they cheered after Kevin Durant suffered an Achilles injury during the fifth game of the series.

While those fans in question—and the ones who heckled Steph Curry’s parents—showed about as much class as someone with a Tasmanian Devil tramp stamp, others have done what they can to help cancel things out, including someone who sent Durant flowers and a handwritten note to apologize on behalf of Canada.

"I hereby apologize on behalf of Canada — prayers for recovery."

A fan sent flowers to the Warriors apologizing for Canada's Kevin Durant cheers.

Now, according to Complex, another fan is doing what he can to right the wrong in the form of a GoFundMe raising money for the Kevin Durant Charity Foundation, which was founded to support at-risk youth through programs dedicated to benefiting the lives of kids from low-income families.

The GoFundMe in question—which is aiming to raise $25,000—was started by Hamzah Moin, who explained his rationale, saying:

“On behalf of the level-headed and true fans of Raptor Nation—from Toronto to Vancouver to Iqaluit to St. John’s, and any fans living outside Canada: we wanted to say ‘sorry.’

We’re sorry that some fans of Raptor Nation at the Scotiabank Arena, Jurassic Park, and in some bars/restaurants showing the game, displayed an ugly side of fandom when they cheered on the injury of Kevin Durant. This isn’t cool. This isn’t right. This isn’t what I expect from fellow Canadians.”

As of this writing, almost $5,000 has been raised, so credit where credit is due to the good eggs trying to cancel out the bad apples.